What I Did For Love

(Extra points for the first one to ID the title reference) 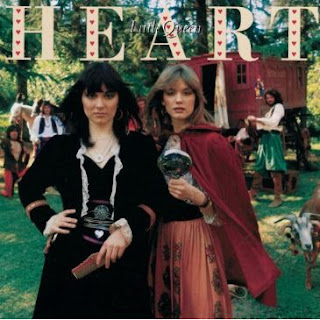 Mr. Kim and I went to see 'Heart' last night. First off, I don't even LIKE Heart. And it was an outside venue. The temperature was something like 170 degrees. With a heat index of 210. At one point I believe that I began to smolder. And there were bugs. And undulating, screeching middle aged people pumping fists and gang signs (gang finger signs? whatever, you know what I mean - those Rock n Roll gestures) in the air. We forgot chairs, so we stood on gravel for 3 1/2 hours. My Crocs have permenant dimples. BUT, Mr. Kim LURVES 'Heart' and I LURVE Mr. Kim. And he goes places and does things with and for me that touch my heart and appall his friends. He's my sous chef in all of my kitchen experiments and eats whatever I put down in front of him. If it doesn't work, he'll cheerfully eat scrambled eggs or order pizza. He traveled halfway across the country to meet my online friend who could have turned out to be an ax murderer (luckily it was the lovely Rachel and her enchanting family, but still - there were no guarantees). He spends time with my family and friends and is the consumate gracious host to any number of folks that I decide to throw together on any given holiday. I could go on and on. He does much, I do little. So going to see a band I don't much care about is the LEAST that I can do.

It really was hot, though and I didn't help myself. I raced home from work and threw on 'play clothes'. I grabbed a T-shirt out of the closet and dashed out. I didn't realize until we got to the concert and sweat started POURING down my back (I'm not a big sweater), that I'd put on a cotton/SPANDEX mix shirt. Lord have mercy, it was like wearing a Spanx T-shirt. Basically, I spent 4 hours on one of the hottest nights of the summer with my torso wrapped in plastic wrap.

I must say (I can't be the only one in the world that can't say "I must say" without thinking of Ed Grimley) the people watching was PRIME. I have a theory that clothing inapproriate to the season is a symptom of mental disturbance and clothing inapproriate to the occasion is a symptom of trashiness. There were plenty of examples of both. One big fella had on fleece jams. One long haired old guy was dressed head to toe (long pants, long sleeved shirt buttoned up to the neck) in Johnny Cash black. White people dreds (these give me the shivers). Lots of high heels on the women. I noticed a LOT of really tough looking chicks - the kind that might have been groupies in the 70's. Big, bleached blond hair, peacock feather earrings (they would have had roach clips attached back then), high waisted jeans so tight that they brought to mind a certain dromedarian attribute.

And why, at concerts, do I always end up behind the broad who insists on screaming like a banshee and who loves interpretive dance? I tend to be a bit of a passive concert goer - I go to hear THEM sing, not myself - but I don't mind a little swaying or head bopping. But, just so you know, the next person who stands in front of me at a concert flipping their hands in front of my face and doing backbends has a good chance of getting a Croc up their butt. I did, however, absolutely LOVE the big ole boy who was 6'8, every bit of 400 pounds and sang, completely in tune and key in FALSETTO every single word to every single song. To borrow a word from my friend Rachel, he 'brighted' me!

None this was helped by the fact that I spent most of the concert huddled behind Mr. Kim's back trying not to look at the stage lights - hoping to avoid a light triggered migraine. I know that I looked like a fool - two people asked me if I was alright. What a dweeb.

It's funny when I think about the fact that just last August I was standing in an outdoor venue, in terrific heat behind undulating fools and, instead of bitching about it, I was utterly entranced. It was the Paul McCartney concert. A dream of my lifetime that I never, ever thought would be fulfilled. Mr. Kim made that dream come true. He got tickets for my 50th birthday present. THAT'S why I accompany him to things like Heart and Barry Manilow concerts. Like I said, it's the least I can do for someone like that.
Posted by Kim S. at 1:10 PM