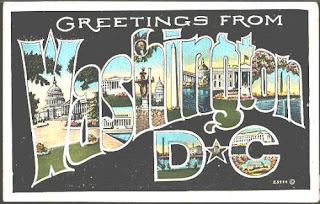 We had a lovely weekend. Three reunions, one nice little surprise and one BIG wonderful surprise.

The plan was for Mr. Kim, The Child and me to go up to Northern VA for the weekend. Leave Richmond Saturday morning, lunch with my half-sister, Ashley, her mom – the ageless Sally, and my Aunt Delores and Uncle Charley. Then check into our hotel (just a Holiday Inn, but a HOTEL!! Have I mentioned my love of hotels and wanting to be Eloise when I was a little girl?) and meet my high school friend, Craig for dinner. Sunday morning we were going to my stepsister, Wendy's house for a visit. Funny - the bare bones sounds like just a lot of running around. But it was more than that.

Lunch on Saturday was especially anticipated because, for one reason or another we hadn't seen any of them for ages. We've all been promising to meet in Fredericksburg for lunch for months and let life get in the way. When we got there Ashley and I were saying how funny Daddy had been when we'd talked to him in Florida the last few weeks. It was just driving him crazy that he couldn't be there. Family gatherings are Daddy's idea of heaven and the fact that we're spread all over the place just kills him. So we were feeling sorry for him, but laughing about it at the same time. As we were getting ready to go to lunch, the doorbell rings. Ashley opens it and there stand Katie and Daddy. Daddy just GRINNING and loving that he's surprised everyone. We proceeded to have a typical Younger meal - the kind of foolishness and stories and volume that makes folks ask to sit next to the crying babies to avoid us. Daddy and Uncle Charley are twins and were presumably perfecting the one-two punch of their repartee in the womb. So laughing is definitely a big part of our noise.
The crew: 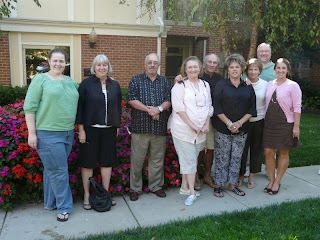 Notice the position of the feet on The Child and me? My momma taught me that. Left to right are: The Child, Katie, Daddy, me, Uncle Charley, Aunt Delores, Sally, Mr. Kim and Ashley.

An example of the lunacy that is my family: 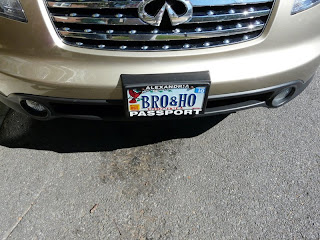 This is the license plate on Uncle Charley and Aunt Delores’ car. He and Daddy call each other ‘Bro’ or ‘Bruv’. Guess who ‘Ho’ would be. My Uncle Charley is 71 years old and as elegant a gentleman as you would hope to meet.

The visit with Craig was especially important because he's going to work in London for two years starting in October or November. We SHOULD see him in England when we go next May, but YOU NEVER KNOW. The old lady who lives in my head tells me that. Craig is one of my dearest friends from high school and while we don't see one another very often, we are in touch a lot. Craig and I were the two premature curmudgeons in our group. We spent four years rolling our eyes and raising our eyebrows to our hairlines. Miss Manners was our idol and Amy Vanderbilt our goddess. We knew the proper way to do everything and those who didn't earned our
never ending scorn. We never showed excessive enthusiasm or excitement and stared witheringly at those who were just way TOO enthusiastic. With me it was just an act - I was so cripplingly self-conscious that pretending icy coolness was better than slowly dying of embarrassment over 4 years of high school. Craig was just born cool and blasé. And while he's looking forward to his time in London, he's not all speechless with excitement. Like I would be...I would be the ultimate fool - alternately dancing around my house singing "I'm moving to London" and mute with stark terror of making such a huge change in my life. He was very kind about dining with an Oompa Loompa - I was GREEN! [Edited to say that I did not actually look like an Oompa Loompa, since, as Mr. Kim reminds me, they have ORANGE faces -like Hollywood starlets - NOT green ones. They have green hair.]

We had a wonderful, wonderful visit - the kind that you have with an old friend who is still a real friend. Equal "parts remember that?" and current conversations. We've all met up with a friend from long ago and had 'that conversation' - the one that once you run out of reminiscences, you have nothing left to say. That is exactly why I don't bother with official reunions anymore. The truth of the matter is that if those people were really important to me, I'd still be in touch with them. Like I am with 'La Group' - my group of high school friends (another phenomenon that is worth its own post – the fact that my closest friends are still the same ones that were my best friends 30+ years ago).

The one nice little surprise that I mentioned above (about 2 hours ago, if you are reading straight through) was the restaurant that Craig picked. Called Chez Andre, it’s been open since 1964. It’s on Glebe Road in Alexandria and given our family’s predilection for all foods French, I can’t believe that I’ve never been there, but I can’t remember it. It is absolutely charming and the food was delicious. It was really classic American French restaurant cuisine – the kind that ALL French restaurants used to serve. We had pate, escargots, oysters Rockefeller, mussels Provençale, veal w/ mushrooms, cream and sherry, trout amandine, fruits de mer – just the quintessential French meal. Mr. Kim had a cream garlic salad dressing that was so good that we wouldn’t let them take it away and smeared it over chunk after chunk of bread. And I had a chocolate gateau that made me swoon. What we wouldn’t give to have a restaurant like that here in Richmond. Everything delicious and really reasonable prices. The owners knew Craig and called him by name. It is the kind of place to which you could take anyone from your toddler to your grandmother – and for any occasion from a casual evening out to a special celebration. We would definitely become regulars if it were here. We’ll be back. And it felt wonderfully sophisticated to part from Craig saying, “See you in London!” 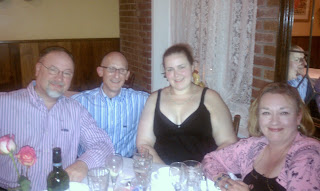 Woke up late Sunday morning, due, I’m sure, to the fumes of garlic breath emanating from Mr. Kim and I. I was surprised that the wallpaper wasn’t falling down in strips. We were due at Wendy’s by 9:30. We dashed out and ran by Pastries by Randolph on Lee Highway in Arlington. I wanted to hang out for hours. Gorgeous, ambrosial looking tarts, cakes, pastries, etc. We grabbed a cheese and berry coffee cake and scored a couple of pastries for later. I blew a garlic-y kiss towards Ditto, who I just didn't have time to visit with this time (he lives just down the street - it was on a trip to see him that we discovered Randolph's) and raced to Wendy's. We had a nice, quiet gossip. We really only got to see Wendy and Ben and a quick hug for Zack who came in just as we were leaving. Unfortunately Tom and Talitha couldn't be there. But I haven't seen Wendy for a long time and it's been even longer since we've had time to just sit down for a quiet conversation. We caught up on everyone's news and had a communal worry about Momma and Ted. We zipped back to pick up The Child from the hotel - she was supposed to meet a friend for brunch, but it got cancelled.

All three of us gave a big sigh and decided that the rest of the day was to be at our own pace and much lazier (which is our exact pace). We had lunch at the legendary Mario's on Wilson Blvd in Arlington: 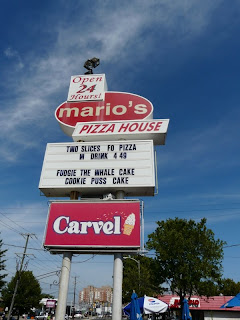 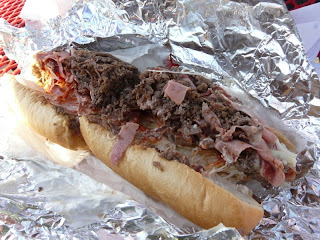 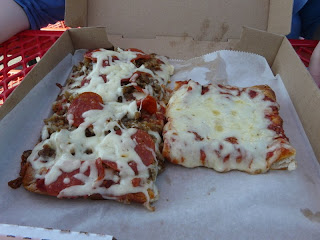 The gentleman at the counter has been there for as long as I can remember. Momma ate here while pregnant with me, so I can claim being born with Mario's in my DNA. Happy Kim: 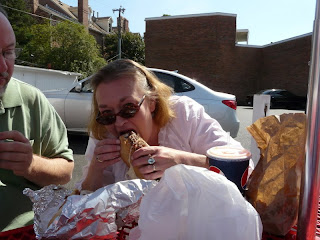 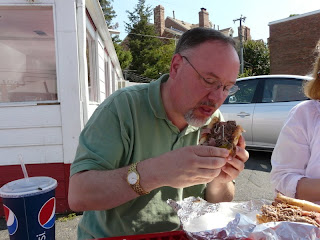 They are open 24 hours, which tempts me on sleepless nights ("hey, it's only 2am - I could get to Mario's and back before I have to be at work at 7:30!"). The subs are sublime (even Philly folks think so), but you might have to had the pizza in utero in order to truly appreciate it. For example: 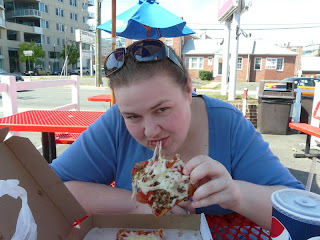 I, having done so, CRAVE it. One off note - there was a Cowboys fan working at the grill. How does this happen??? So very, very wrong.

Sated and sleepy, we headed back to Richmond. One detour for Ikea, where I drooled over the model kitchens and grabbed a sample book to add to my ain't never gonna happen pile of renovation magazines. I can dream, right?

I've mentioned half and step sisters in this post. Those are words that I don't use a lot - our family just doesn't, but I was trying to be specific to let folks know who exactly I was talking about and help Rachel (who loves all the permutations of 'family' and figuring it all out). Divorce is practically a Family Tradition with my family of origin. My Uncle Charley tells a hilarious story about running into a former neighbor of my grandmother's (Bebo) that he hadn't seen in years. As the neighbor asked about each couple (Bebo and Bill, Uncle Tom and Margaret, Uncle Charley and Gail, Daddy and Momma), Charley had to tell her, with increasing embarrassment that each couple had, unfortunately broken up, but were happy and doing just fine. He said that she ended up abruptly ending the conversation and after giving him a suspicious glance, precipitously departed. He says that he was glad that she didn't know any of the next generation, almost all of whom have also been married at least twice.

I have had 2 stepmoms, 1 stepdad, 1 step grandfather, 1 step grandmother (that I ever met), a half-sister, 3 stepsisters, 4 step nieces, 2 step nephews, 2 step GREAT nieces, 2 step GREAT nephews and a host of step cousins, great aunts and uncles and what-have-you. We are a deeply peculiar family - we've never treated each other like steps - we don't even use the words 'step' and 'half'. All four of my parents (2 regulars and 2 steps) are good friends. I call Daddy and Ted the 'husbands in law'. When all four of my mother's parents were alive the Florida set would sometimes stop off in NC to say hello to the NC set on their way to VA. We even have these weird, convoluted relationships with folks that are not even related to us by marriage: for instance, The Child grew up with my step niece's grandmother and so, calls her Nanny just like Jennifer does. This lady joins us for our Christmas Eve gatherings whenever she can. Sally hasn't officially been The Child's step-grandma in her conscious memory - but she still calls Sally 'Grandma Sally'. This is just how we are and what we do. It never seemed particularly odd to me until I started to meet other kids of divorced parents who were stunned and envious of how my family operated. I can remember at my 13th birthday party a friend looking at the four of my parents standing together, chatting and laughing. She said "That's amazing, my mom won't even let my stepmother into our house". She sounded envious and sad. No one had ever been envious of this little fatty before, but I wasn't happy, just sad for her and grateful to my bizarre family.

This crazy VitaMix of a family just exactly suits me. I am a bit of a loner, but sometimes need a crowd. When that happens, I can find one very easily. I like that we are bound less by obligation than by love.

It was lovely to see everyone, to reconnect and confirm those ties. And all the laughing wasn't bad, either.
Posted by Kim S. at 7:31 PM