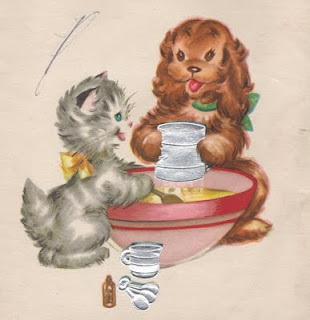 Yes, I’m back wasting more of my time and yours. Three posts in one day. Considering that I had TWO in both March and April (and one of those was actually Mr. Kim), I’m doing pretty well. Of course, with the trip coming up, I doubt I’ll be doing much more this month, so you might want to ration yourselves.

Anyway, in spite of all my verbosity, I’ve actually accomplished quite a lot here today. I’ve sorted out most of my clothes and cosmetics and jewelry and stuff. I’ve gotten all of the Mother’s day and May birthday gifts in the mail (do you ADORE those 24 hour mailing machines at the post office? I refuse to send anything that won’t fit in them). I haven’t made dinner yet, though. Hmmm. It’s almost 9pm. Maybe I’d better check with Mr. Kim before I settle in here for a long chat. (Jeopardy music interval). Nah, he’s fine. I just turned the oven on to preheat for a frozen pizza, so we’re good.

With all of the trip preparation, I have hardly cooked a meal in the last month. I just looked back at my kitchen journal and I counted 16 meals since April 1st. That includes breakfasts and breakfast-for-dinner and cheese, cracker and fruit dinners. Yes, I keep a kitchen journal – with pictures and everything. It is on a Word document, not a book. I used to keep a book and I love the IDEA of a book filled with real handwriting and pictures and cunning little sketches, but it just got incredibly unwieldy. And honestly, as old as I feel sometimes, I am, after all, a child of my era and I just find that I compose much better typing than I do handwriting things. Not to mention the arthritis and neuropathy (I AM old).

Anyway, while I haven’t been doing much regular cooking lately I’ve been doing rather a lot of baking, for one reason or another. I thought I’d like to show these off a little, because I was really pleased with some of the results.

At the beginning of April we had my MIL, Jo, over for dinner. She is one of my very favorite people to cook for. She’s very adventurous and eats almost anything. She’s fun to cook for because I can go all out and take risks. I did a chilled curried apple soup with curry leaf rolls as a starter. Dinner was risk-free – I have a recipe from an online friend, Dianne at Cookskorner.com, for garlic shrimp. We have this shrimp all the time and adore it. Dessert was two different kinds of cookies – both new recipes to me. One success and one…well, not quite. (Click to enlarge any image). 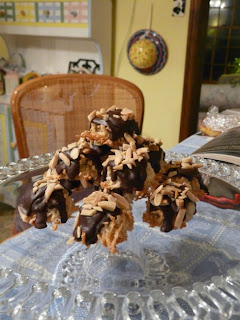 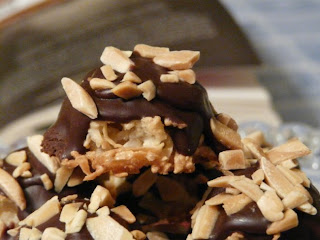 These are called “Almond Joy Cookies” and the recipe is from Deensiebat at eGullet.org. A fantastic coconut macaroon with ganache and toasted almonds. This was obviously the success. 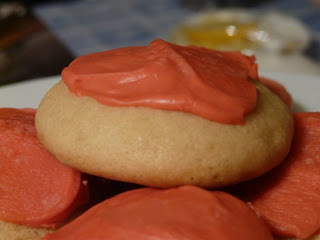 These were something that I called “Cotton Candy Cookies” and were not so successful. They require a little explanation. I love those Lofthouse cookies that they have in grocery store bakeries. They are tender and soft and very cakey. I am also in love with Brewster’s Cotton Candy Explosion ice cream. It is cotton candy flavored with Pop Rocks mixed in. I somehow became obsessed with the idea of making a Lofthouse-type cooky with the flavor of the ice cream. A coworker makes a copycat Lofthouse cooky and gave me her recipe. I put a little cotton candy flavoring in the cooky dough and in the frosting and topped them with Pop Rocks. Then my problems began – the cookies are lovely and tender and the frosting smooth and not numbingly sweet (better, in fact, than the Lofthouse frosting). But the flavoring didn’t taste at ALL like cotton candy – just vaguely sweet and fruity. The Pop Rocks worked just fine when we tasted the cookies immediately after topping the cookies – good explosiveness. But they fairly quickly melted away to nothing. Sigh. I’m sure that Brewster’s gets some special Pop Rocks that will stand up to being wetted with the ice cream. They are much larger than the ones that I got. Oh, well. My next idea for the cookies is to incorporate toasted coconut, which I’m sure will work much better. And Kerry at Cookskorner suggested coating the Pop Rocks with cocoa butter to help them to hold up to the moisture in the frosting. So, I’ll try again.

Another Deensiebat recipe that I tried in April was this delicious coffee cake: 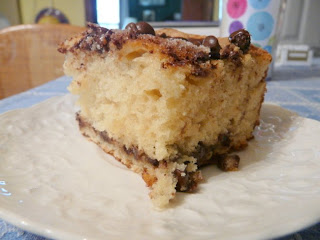 It is cinnamon and chocolate chip and it was fantastic. I made it one Sunday morning for breakfast and will definitely make it again. I got the layers a little messed up – there should be two even layers of cake and a middle layer of chocolate. My chocolate layer is a little low.

The next occasion to come along was a birthday for one of Mr. Kim’s coworkers. She requested an angel food cake: 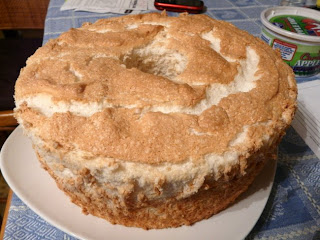 I was really happy with the way this turned out. I think it was my best angel food cake effort yet.

Next was an actual JOB! Getting paid to bake is both gratifying and nerve wracking! One of the nurses at work ordered a dozen cupcakes and a layer cake for a baby shower at her church. Everything turned out well, but I was plagued with cake issues! To make things easier on myself, I made the cupcakes and the cake layers the weekend before they were needed and froze them. Then the day before I thawed them and set to frosting and decorating. She wanted yellow cupcakes with white icing and sprinkles. She wanted the cake to be chocolate with marshmallow filling and white icing decorated with the mom’s color choice – mainly bright red, orange and yellow. I used canned frosting for everything since I have yet to find a reliable, tasty frosting recipe.

For the cupcakes I used my go to yellow cake recipe that I found online – it was recommended by oli at eGullet. They worked out just fine: 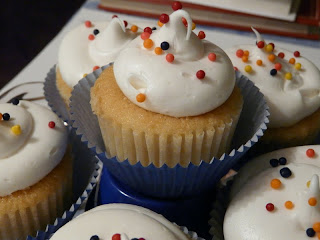 The cake was a bit more problematical, not to mention ultimately exhausting. I used my Chocolate Bar Cupcake recipe – one of the easiest and best chocolate cakes I make. It was the marshmallow filling that did me in. Right after I put the layers together with the Fluff, they began to s-l- i-d-e. Marshmallow Fluff OOZES. I guess I knew this somewhere in my head, but unfortunately the knowledge came to the fore a little late. I wasted a long time trying to edge it back and driving skewers through the layers. I finally faced the fact that it just wasn’t going to work (though I decided that Fluff will make an awesome cupcake filler – so not a totally wasted experiment). Mr. Kim went off to the store for more cake makings (I forgot to mention that this particular cake recipe makes only a 2 layer cake and I wanted 3 – so to get one cake, I made this recipe FOUR times). While he was gone, I made this: 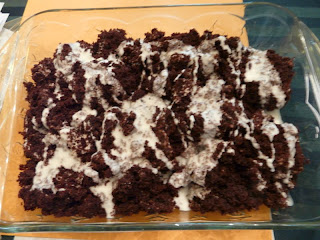 Mistake Cake. I have experience with Mistake Cake – the same thing happened to The Child’s Chocolate Turtle birthday cake in January. Dulce de leche OOZES, too. Sigh. I just sliced up the cake and smooshed it a bit and topped it with melted icing. One went to work for noshing and the rest was distributed to the neighbors.

The next cake worked much better with regular buttercream between the layers. Here is the final result: 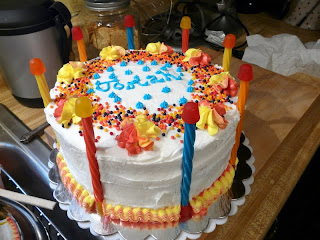 My lettering skillz, they are not mad, but I thought the cake was really cute. I used the sprinkles in the colors that she wanted and piped the baby’s name in blue (as requested). I tried my hand at two color piping for the first time with the puffs on top of the cake and the edging at the bottom and really liked the effect. But my favorite part was the ‘poles’. I don’t really know what to call them. I wasn’t crazy about the requested colors – bright red, yellow and orange, royal blue and purple. I thought they were a little garish for a baby shower, not to mention a bit Fall-like. So I went to Lowe’s and got some paint chips in those colors and when I saw them all together, I thought ‘circus’. And somehow (who knows how my mind works) I came up with this ‘pole’ idea. They are just bright Twizzlers on skewers with Dots candies at the top and bottom. They are too long, I think, but I like them a lot and I think they add a little circus or maybe Merry Go Round feeling. A bit of whimsy, if you will.

I’ve already shown my Easter contribution in the Easter post, so we’ll skip over that. The last thing that I baked (and the last thing that I WILL bake until we get back) was for a work luncheon for one of our physical therapists who is going out on maternity leave. This was a surprise, so the mom-to-be didn’t decide the colors, I did! I got to design everything on my own and I had so much fun without that interference. No, no one has ever called me a control freak – why do you ask? I decided to make cupcakes (what else?) based on some I saw in a magazine: 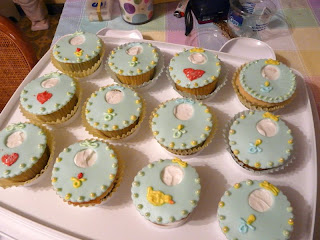 Just yellow cupcakes with homemade fondant ‘bib’ decorations. This was my first time working with fondant and I really enjoyed it. It was so easy – like working with Play Doh! I had always heard about how awful fondant tastes. I thought it was a little bland, but not unpleasant. Seeing as it is only marshmallow, white chocolate, butter, cream, vanilla and 10X, how bad could it possibly taste? Also, these were very, very thin. 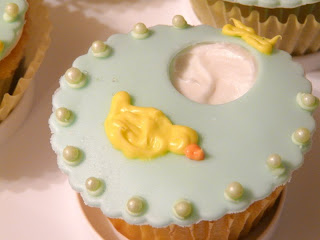 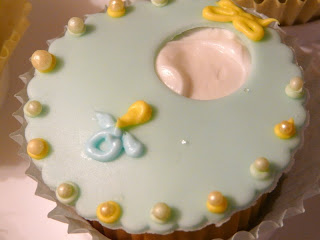 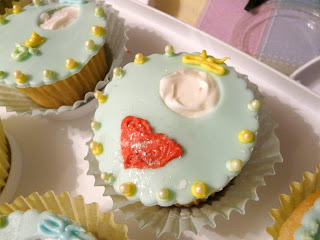 I tell you, I’ve never had so many impressed people. And it was SO simple!

So that’s it, until at least June. Nobody better ask me to make so much as a piece of toast until then. Really…I hope they don’t. Because I am really BAD at saying ‘NO’. I can barely form the word. 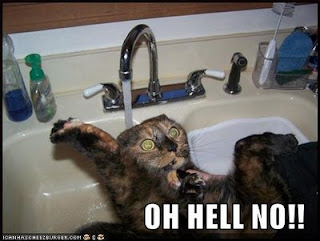