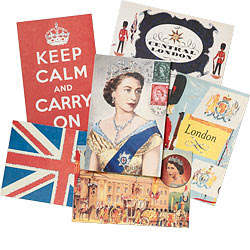 Friday, May 13th
Richmond to Philadelphia to Heathrow

Before I begin the saga, I should explain my new traveling ideology. I’ve decided that no matter how odd things are, the best travel attitude to adopt is: “How lovely. What an interesting and unusual way to do that. That’s exactly the proper way to do that, of course. I wonder why I never thought of it.” It covers everything. When the chap who is handing out the personal listening devices at Stonehenge just looks at you and assumes you are Russian. When the lady you exits a toilet stall in Paris and sees the back of a gentleman standing in front of the urinal. When the speed limit on a one-car wide, but two direction road is 50 MPH. To all of these, and more, we just said, “what a good idea!” and any stress that might have reared its ugly and vacation-killing head just floated away.

My in laws, Judy and Kenny dropped us off at the airport. After a stress-free check in (our entire trip was apparently smiled on by St. Christopher, because we had a remarkably problem and complication free trip), we had our send off meal at the airport Applebee's. This is turning into a rotten little tradition. We did the same thing before our trip to New Orleans. It is hardly a promising inaugural meal for a gustatory vacation, but it didn't curse NOLA and so we braved it again. Crap meal, blah, blah, blah - no need to waste space on Applebee's!!

After much advice and research, we knew that we should try to get as much sleep as possible on the trip over, since we were arriving at 10am London time. Accordingly, after taking off from Philadelphia, we downed a couple of OTC sleeping pills, tucked our neck pillows under our chins and prepared to snooze.

But....there was a baby. A sad baby. A sad and angry baby. She was sad and angry for SEVEN hours. Straight. Her parents didn't do anything to try to calm her until about 5 1/2 hours into the trip. Then they just walked up and down the aisle a couple of times and gave up. I thought that I was going to lose my mind. How can anyone possibly keep up screaming for 7 freaking HOURS???? I didn't blame the baby (though Mr. Kim and I guiltily confessed to one another later that we both had thought about the last episode of MASH) and I didn't blame the parents for the baby crying. I did blame the parents for not at least trying to soothe her, but felt better after I'd bludgeoned them with my breakfast tray.

Not really, of course, just in my mind.

So except for the screaming and the bludgeoning, it was an uneventful flight. We flew into Heathrow over the usual suburbs, anonymous, but looking somehow foreign. You might not recognize it as England, but you wouldn't mistake it for anywhere I've ever seen in America. I'm such a doof - I always gaze avidly out the window, expecting to see postcard scenes. Like they were going to fly straight up the Thames and I'd see Tower bridge and St. Paul's with maybe Edinburgh on the horizon (well, it is a small country).

We were met by our dear friend, Craig. Craig and I went to high school together and have been buds ever since. Never lost track of one another, always stayed in touch. This is something of an accomplishment, I think, since we graduated in 1977! As I’ve said before somewhere (maybe here) Craig was, I think, born a grown up and I tried hard to pretend to have been, too. We were the ‘too cool for school’ kids. We spent our high school years sneering slightly at the juvenile antics of our schoolmates. Craig is still a grown up, while I’ve devolved into a big ole goof ball. I don’t know how he’s put up with me all these years, but he has. Craig is on a two year assignment working in London with a lovely posh flat – central to everything and in a fantastic neighborhood. He very kindly offered to put us up while we were in London. Dumbfounded by his generosity, we gratefully accepted – London hotels are ruinous and besides, it meant more visiting time. On top of all the advance information he supplied us with and walking us all over London, he also met us at the airport! When you know that he had JUST THE MORNING BEFORE arrived back in London from a trip home to the states and was traveling BACK to the airport for the second time in 24 hours, you’ll realize what a gentleman he is.

We rode the train into the city, craning our necks for our first glimpses of ENGLAND!!! Now I know that train rides never take you through the nicest neighborhoods, but I still liked it and thought that their ‘burbs were more attractive than ours. We got to Craig’s, dropped our stuff, rested not at all and hit the streets.

Something that we kept seeing in London were restaurants called the Aberdeen steak house, the Scottish steak house, and the American steakhouse. All over the place. You could tell they were horrible just looking at them, but I strangely wanted to eat in one. Same with Little Chef. Mysterious reaction on my part. We didn’t, of course.

Craig, God bless him, really played the tour guide (which is just NOT him). We went to:
Piccadilly Circus: 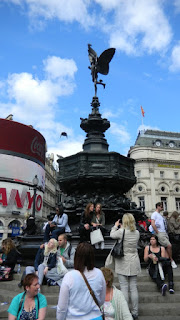 – kinda like an upscale Times Square with better buildings and BIG RED BUSES.

We had lunch at EAT. This is a London based chain – sandwiches, soups, desserts, etc. Think Panera, except much, much better. And MUCH, MUCH more interesting. And it shouldn’t be – the sandwiches are Panera are made when you order them, at EAT, they are already made up in boxes on a refrigerated shelf. They have no business being as good as they are. 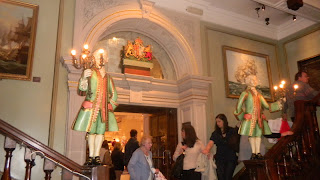 – the holy mecca for this food and Anglo obsessed girl. From the incredible confections and pastries on the ground floor to the gorgeous meats and vegetables on the lower ground floor to the exquisite china, crystal and teapots on the first floor, I was snapping pictures and gazing rapturously for a good hour. The good natured Craig and Mr. Kim followed in my wake and let me gape.

New Bond Street – an unbelievably posh street full of the most elegant stores I’ve ever seen – Piaget, Harry Winston, Chanel, Louis Vuitton, Van Cleef & Arpels, and on and on. It was a kick to see them all and to see people walking out of the shops with actual bags. We only window shopped. We knew that there was no way we could afford even the smallest bauble, besides every store had a well-dressed bouncer dude out front. Elegant looking, but BIG.

Selfridge’s department store – Just exactly what a nice department store should be – down to a fabulous food hall (which even included a large American section with things like Kraft Macaroni & Cheese, JIF, Crisco and marshmallow Fluff). In the food hall was a mini branch of Lola’s cupcakes – again, I gazed open mouthed while Mr. Kim and Craig were patient. 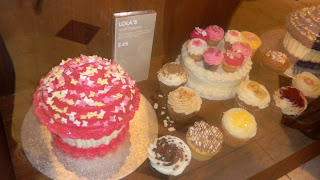 We also walked for what seemed like MILES gawping at beautiful buildings and alleyways and gardens: 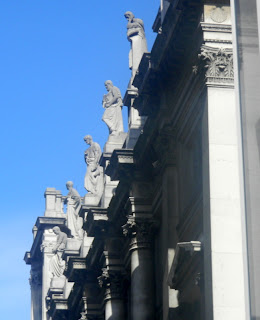 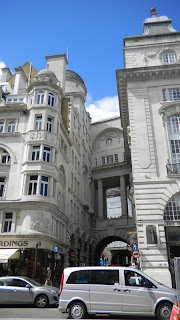 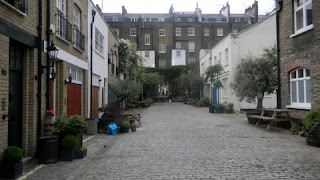 This is a mews just behind Craig’s building. Even the alleys are lovely in England. 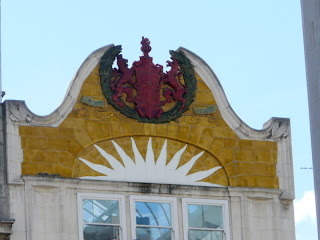 We were so relieved when we knew for sure that we were not going to be in England for The Wedding. We set our dates way before Wills and Kate did and were terrified that it was going to coincide. Now I am as romantic as the next person, and an Anglophile besides. And I stayed up all night to watch the Charles and Diana nuptials (she and I got married 8 months apart and William was born a year and a half before The Child – so we were of an age). But I had NO wish to share my first experience of England with the masses of people who would be there for the wedding. I was, however, hoping to score some fabulously tacky wedding memorabilia. I got pretty lucky – bright tacky tea towels, a commemorative biscuit (cooky) tin, a reusable grocery bag and condoms for The Child (wish I’d bought a dozen of the bags), but I didn’t find the prize I really wanted – a Royal Wedding Handkerchief. I’ve even looked on ebay, but, alas, no such luck. Everywhere we went in England we found wedding paraphernalia – not just in stores, but bunting on houses and signs in windows. I found it very touching. And very, very English.

That night the three of us went to Quo Vadis, a fantastic restaurant in Soho for dinner. I have to say that my eGullet.org pals really came through for us. They recommended every single restaurant that we ate dinner at in London the three nights we stayed and they were all wonderful. The menu is here. if you’d like to see it. I’ll be starting a thread at eGullet about the more food centered part of the trip and I’ll link to it when it is done. Suffice to say that the restaurant was all that I hoped it would be. All three of us had wonderful meals. Mike had John Dory for the first time and said that it was the best fish he’d ever eaten. 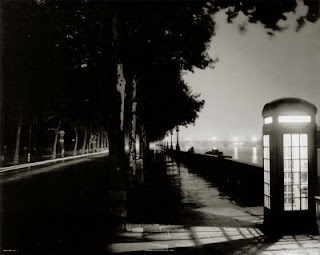