I don’t bake often. The last cake I baked was in July 1984. I remember it well because I was young, stupid, and trying to surprise Queen Kim for her birthday. We were new parents and dirt poor and living in a walk up in the Fan District long before it became a toney place to live. And while I had mastered the art of the boiled egg and fried meat, I had never baked anything, unless you count helping my sister with that Easy Bake thingie when we were kids. But a cake was a must for some reason that escapes me now.

So I went to the store and bought what looked like a decent cake mix (scratch not being even on my radar). The Betty Crocker and Duncan Hines options were more expensive than the simple Martha White box cake, and surely there was not a difference, so home it went. In our oversized kitchen with exposed pipes and ancient appliances – surely a bedroom when the upper and lower apartments were a single residence – I stealthily put everything together. No hand mixer – that would tip the surprise to Kim who sat one room away – so I hand combined everything. I do not at this point recall what I did wrong, but the cake came out of the oven looking like two misshapen disks. I do not mean high in the middle, I mean high on one side of one and high on ALL sides on the other. I am quite certain I just went by the clock and never checked their doneness. But I forced them on top of each other and slopped some glop frosting on them from yet another mix, having either eschewed the premade frostings or not seen them or perhaps they weren’t yet available, who knows. But I slopped it all together. And I carried in to Kim.

The look of joyful true surprise on her face as she looked at me quickly gave way to undisguised amusement at this sliding quasimoto of a cake. I echoed her laughter to hide the embarrassment as I realized for the first time how silly it looked. Then we bit into it and found that the worst was yet to come. Suffice it to say that I learned a lot about THOROUGHLY mixing ingredients. And I never baked another cake. Until now.

I saw Paula D throw together a very simple apple pecan cake last week and decided that even I could manage it. She assured her audience that it was fool-proof, and I usually chuckle at such statements since these chefs have never seen me cook anything. But I decided to take it on.

Cutting to the chase, I put this together on a day off to surprise Kim. When she came home form work, the look of joyful true surprise on her face as she looked at me quickly gave way to undisguised amusement as I told her what was baking. The texture turned out very moist and smooth, and the flavor was a nice balance of apple and cinnamon, an obviously trite but winning combo. It held together better than I feared it would. Kim must have liked it, as she has asked me to make another for our new neighbors in place of her planned cookie-welcome. 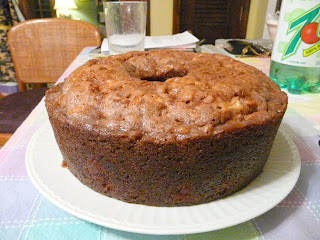 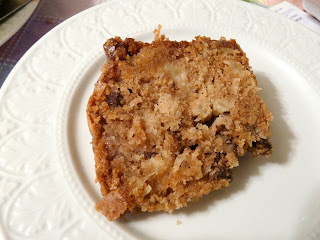