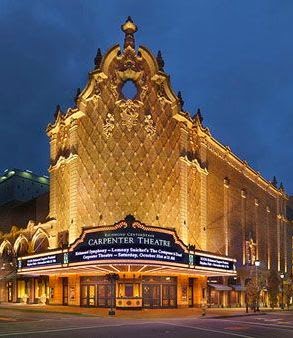 I’ve been saving this blog post since our jaunt to the Carpenter Center in Richmond to hear the symphony do a Mozart concert back in March.  I couldn’t write it before because it was during Lent and I’d given up bitching and moaning for the duration.

And this time, the bitching and moaning is not about the music.  The program was wonderful and I didn’t nod off once (I am a known philistine).  No, the B & M’ing is about the horror that is the Carpenter Center itself.  And not in a fun, kitchy horror like The Theatre Formally Known As The  Mosque.  The Carpenter Center is a truly terrible mishmash monument to bad taste.

Do not allow that beautiful outside shot above to fool you.  The outer halls are a conglomeration of Roman, Greek, Moorish, Spanish with peculiar chairs and railing and columns.

The auditorium itself looks like something that was got up for some lugubrious Italian opera (all fat sopranos and sweaty tenors).   And as if some committee said, “Well, we’ve already spent the money, let’s just leave it”:

The ceiling is supposed to look like the sky, I think.  But to me it looks so much like the undulating sea floor that I actually got a little mal de mer.

And what the hell are these: 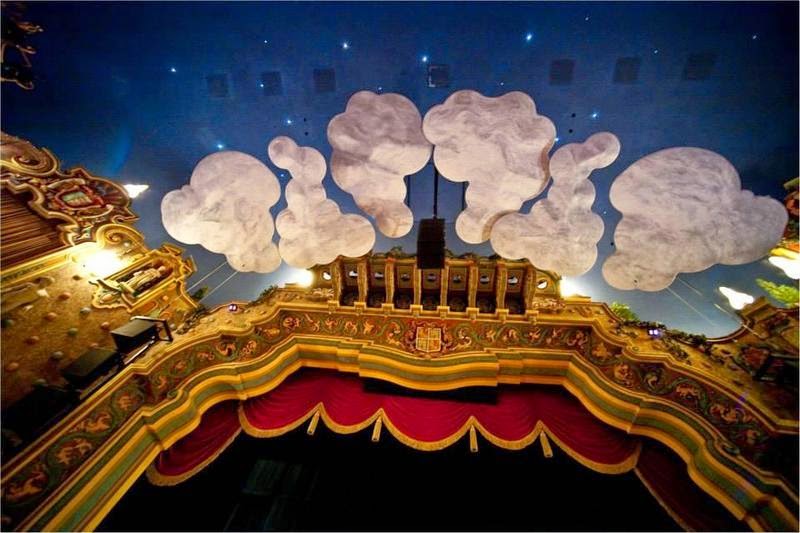 Clouds?  A poor imitation of Calder?

I don’t know who made all of the decisions about the redecoration of this space but it is typical of our fair city, I’m afraid.  Richmond officials seem to spend most of their time with their heads up their posteriors.  I just found out the one of their current plans is to eliminate over 700 on street parking spaces on our major thoroughfare to make way for a bus lane.  They do these things and then wonder why no one in the suburbs ever comes downtown.
Posted by Kim S. at 6:06 PM