We usually go to the Outer Banks for our anniversary each March.  But this year we decided to try something new.  We ended up in Fredericksburg on a weekend drive back in February and had dinner at one of our favorite restaurants, The Bavarian Chef.  The drive home was so easy that it occurred to us that a weekend trip less than an hour from home might be a really nice way to spend our anniversary – no exhausting drive home!

We checked into our lovely room at the Courtyard on Caroline Street: 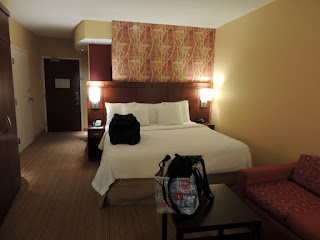 Perfect location – right in the Historic District and within walking distance of almost everything we wanted to see.  First things first.  Carl’s Frozen Custard: 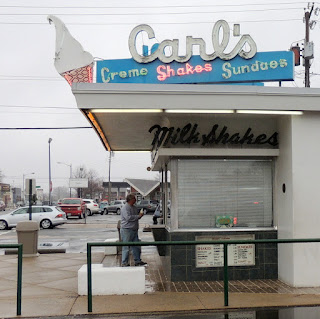 It was still midday, so there was no one in line but this lone gentleman who told us that he HAD to stop.  We understood completely: 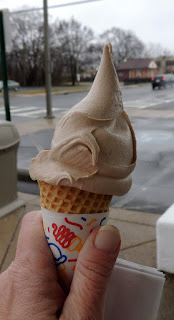 Frozen custard is my favorite form of frozen dessert.  I grew up going to the Frozen Dairy Bar on Route 50 in Falls Church VA: 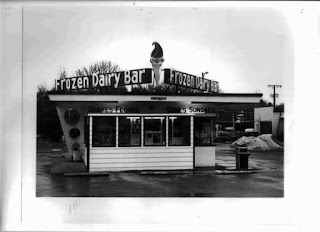 (Internet photo)
This place opened in 1950, so I knew it my entire life.  Carl’s tastes like my childhood.

We wandered around town and ended up at The Bavarian Chef for dinner.  The Madison location has been one of our favorite places since we lived in Charlottesville when Mr. Kim was in grad school.  Everything is delicious, the people are incredibly welcoming and the atmosphere is cozy.  You always worry when a restaurant opens additional locations – will it dilute the quality?  This is NOT the case in the Fredericksburg restaurant at all.  It is everything we want it to be.  And my favorite dish there (one of my top 10 favorite meals in the world) is exactly the same: 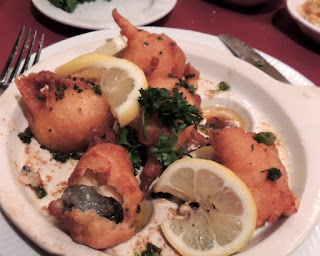 This is what they call “Snails in Beer Batter Provencal”.  In other words, escargot fritters!!!  Drenched in garlic butter!!!!  Escargot has been one of my favorites since I was a little kid, believe it or not, but this version is the best I’ve ever had.  We had a lovely evening – being treated royally, as always.  You can see how happy we are: 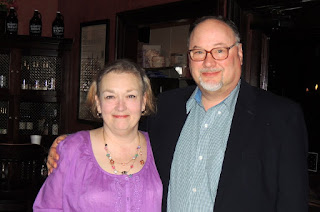 Luckily we were close to the hotel, because we were so full that there was a real danger of falling asleep on our feet!

We had passed this place going to Carl’s the day before and thought it looked like our kind of place for breakfast: 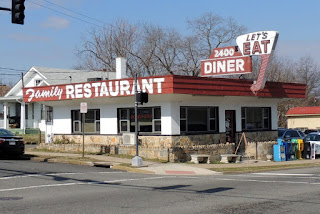 Instincts proved not at all faulty!  Very cool and friendly place, owned by Greeks and with a great breakfast menu. 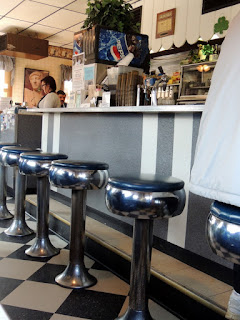 Mr. Kim had a Greek omelet: 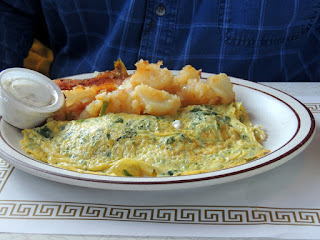 And I had this crazy plate of eggs, potatoes, sausage, and creamed chipped beef on toast: 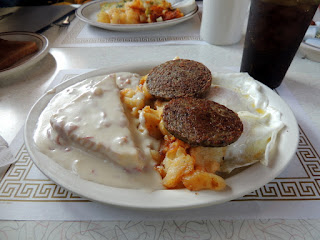 I can’t even find it on the menu, so I obviously ordered a SIDE ORDER of the creamed chipped beef.  I don’t thing I even finished half of this.  Everything was fantastic.  Mr. Kim’s omelet was so good that the next morning (yes, we ate there TWICE), he talked the man sitting next to him at the counter into ordering it, too!

We took one of our aimless drives – following interesting signs and country roads - and ended up in a cute little town on the Potomac called Fairview Beach (pop. 391).  Really not much more than some houses, a marina, a general store and this restaurant: 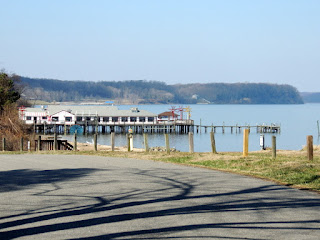 We had a drink (which the bartender comped as a way of saying welcome), wandered the dock and gazed at the water.  Lovely.  We also drove around collecting ‘For Sale’ signs and dreaming of a retirement beside the river.  We came back to earth when we found that even the shacks were well over $2K!  Back in Fredericksburg we puttered around antique stores: 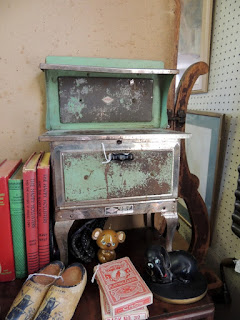 And had lunch at Goolrick’s Pharmacy, an old fashioned place with a lunch counter: 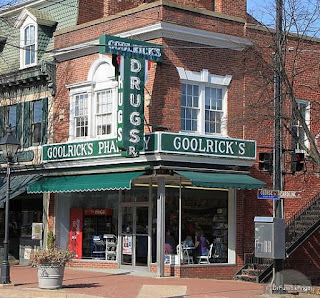 We have our good friend, Julie, to thank for recommending both Goolrick’s and the Gari Melcher house & Studio to us (more later about that).  Mr. Kim had a chocolate malt and I had an ice cream soda.  BLTs and a tuna salad completed our lunch.  Their menu is truly old fashioned, with sandwiches like chicken salad, egg salad, liverwurst, etc.  And the soda fountain choices are perfect.  Like being a kid in the 1960’s and eating out with your mom after a doctor’s appointment at Drug Fair!  And because we are 12, this old sign gave us a giggle: 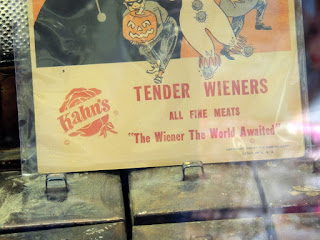 We puttered some more and went back to our room.  We had great plans for dinner, but ended up falling asleep, being the old farts we are.  I woke up after 9pm starving.  I knew it was too late to go to any of the places that we’d been thinking of and had the idea that, being a college town, Fredericksburg MUST have a good sub place.  Then a little idea trickled into my head.  We were only about an hour away from Arlington.  I actually KNEW a place that had subs and was open until 3am.  Plenty of time to get there.  I woke Mr. Kim up, detailed my plan and he was ready to go in about 3 minutes.  Approximately an hour later we arrived: 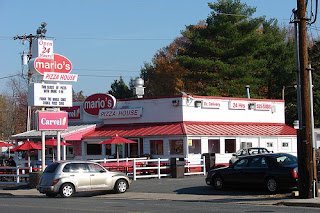 I’m sure I’ve posted about Mario’s before.  It opened in 1957 – which means that I ate Mario’s before I was born.  It was one of Momma’s pregnancy cravings.  They have the best subs I’ve ever tasted in my life.  We’ve even taken Philly folks there who have become addicted.  The thing to get is a ham, steak and cheese:

I love this sub, as you can see: 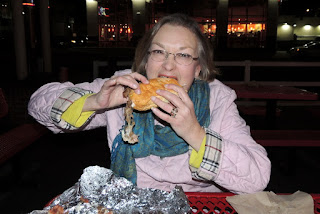 One of my 'last meal' items.  As I said, I was eating this stuff before I was born, which is the only explanation for the fact that I love their pizza, too: 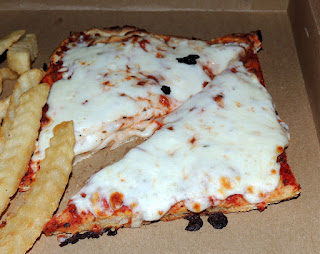 I don’t think anyone who hasn’t grown up with Mario’s pizza would love it.  I am a total pizza snob and won’t eat the evil three (Domino’s, Pizza Hut or Papa John’s) and yet, I love Mario’s.  It is a perplexity.  We made our way back to Fredericksburg, replete and sleepy.

Our last day.  After breakfast back at the 2400 Diner, we went a little farther afield for the day.  We wandered around the Fredericksburg City Cemetery and Confederate Cemetery: 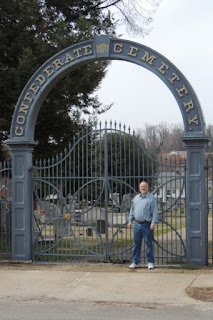 It is a lovely setting.  Old enough (established in 1844) to be peaceful instead of creepy. 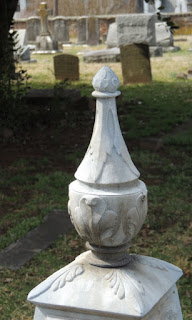 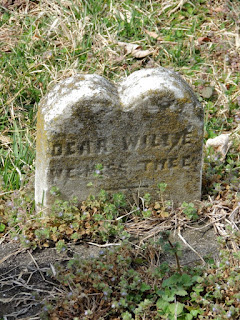 Even some beads ala New Orleans: 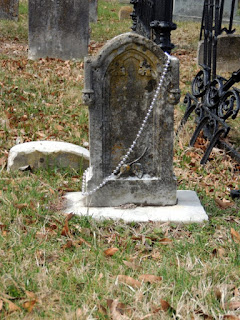 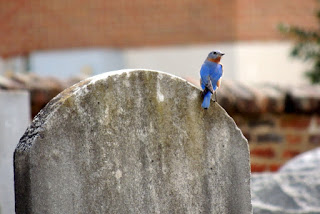 There was a plaque in the Confederate cemetery dedicated to the memory of several named soldiers whose remains had been buried elsewhere in town but had been dug up and booted out to make room for Union veterans several years later.  But instead of relocating the Confederate remains here, they were simply discarded.  People carrying the symbols of that war in their hearts are nothing new to this current century.

March Madness always is a part of our anniversary weekend.  Luckily, we both love college basketball and UVA was playing, so we stopped at a bar and had a snack and watched: 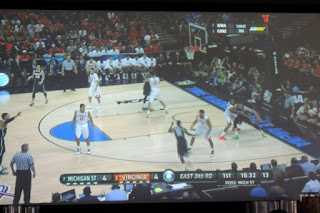 Note the score.  This was the last time Mr. Kim was happy during the game.  We lost to Michigan State 60-54.  Mr. Kim is not happy: 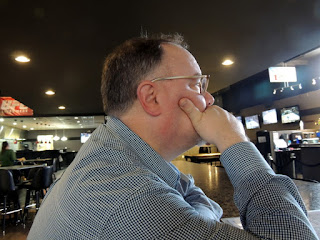 We cheered ourselves up with our last Fredericksburg excursion of the weekend.  As I said before, Julie had suggested that we go to the Gari Melcher House & Art Studio.  I confess, I’d never heard of Gari Melcher or the home.  Neither had Mr. Kim.  Thank you to Julie for correcting that.  We were charmed by the home and overwhelmed by the talent of the artist. 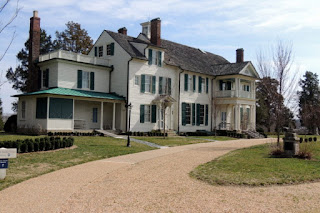 The studio and gallery: 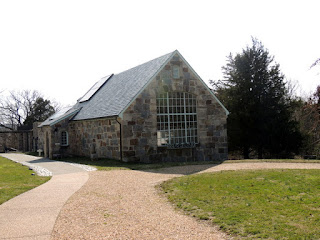 Some of his work: 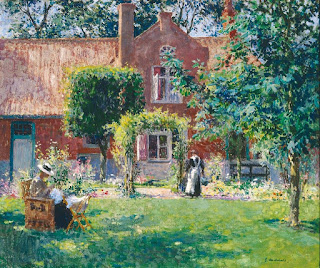 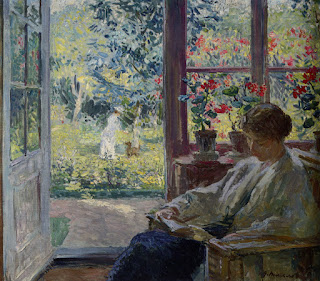 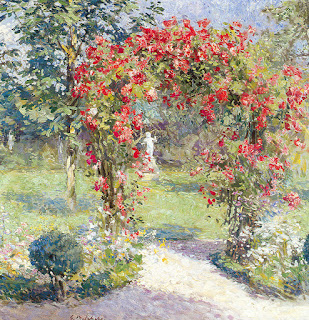 The tour of the house is guided, but you can wander the garden and the studio/gallery freely.  We will most definitely go back.  We were the last tour of the day, so we didn’t get to spend much time in the shop.  I want to choose a print – this art is something that I need in my home!  The website give lots of good information about Melchers and his home and art: http://garimelchers.umw.edu/
Cheered up considerably, as you can see,: 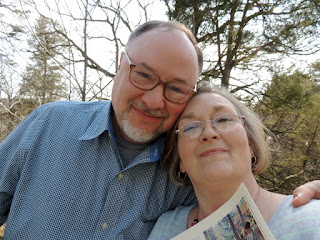 we made our way back to Richmond with yet another wonderful trip and another wonderful year of being together under our belts (and perhaps a couple more pounds).  I am uniquely blessed to have the husband that I have.  We share and enjoy one another so much.  I know how lucky I am.  Most days.  Sometimes I take it for granted, but I try not to.