Day Two. Clock goes off at 6, I get out of bed at 7:15. No matter, time to get started. I start pulling pieces parts of the smoker out and line them up. I feel victorious when I get them all set out without dropping any of them into my coffee. As expected, some of the nuts/bolts/screws are missing. Back to Lowes. I pick up the fasteners and go to the check out, and the same clerk is there as last night. She looks at me and smiles and asks me if I’m done cooking. I just chuckle that hollow “what can I say here without sounding stupid” awkward sound. It’s 9 AM and there’s meat to cook. And goddess willing, this is my last trip to Lowes today.

The first thing I do is rub the meat. If nothing else works today, at least I will be able to shove the beast into the oven, go all teenager sullen, and ask The Queen to just cook the damned thing. 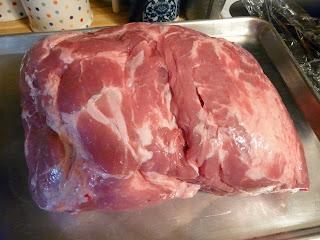 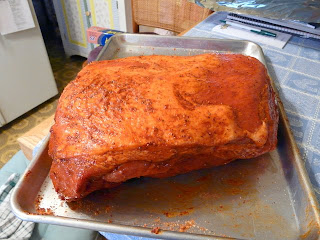 Then I put the pieces parts together. Not too bad, about 30 minutes. Never mind the parts left over, they are probably extras: 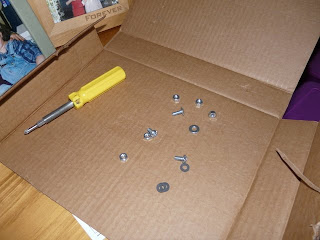 I re-read the instructions and notice the part about the use of the wood and realize I have a small issue. I have wood chips, which I had intended to soak. The instructions say use blocks and put them on dry. I opt for the wet method, because no matter whether I should have bought blocks, the chips I have would just burn up dry. And I am not going back to Lowes for hardwood blocks. So using wet chips seems like the right decision, but I have just departed from the path. Ah well, if it bombs, there’s always pizza. Besides, the wood is optional I think. It is an important option, since it is the source of the flavor, but what’s the worst thing that can happen? I have to add more or pull some out? So after a 30 minute soak I make a foil packet for the wood and move on.

Lighting the coals, I feel like Tom Hanks in Castaway. “I….HAVE….MADE….FIRE!” 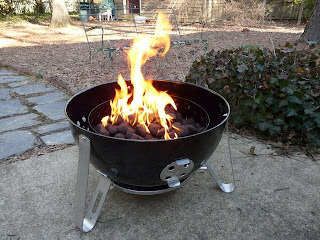 Not a great modern achievement, but it’s been hours in the making. Or months, depending on when you start counting. I haven’t cooked on coals in decades. I’d forgotten the smell of the coals, the irrational fear that once the flames are gone the fire is out, the seeming randomness of the cooking temperature. But by now I am committed and feeling better about this. I even have fragment memory flashes of dad, watching him light the coals in the rickety three legged grill and being allowed to stay and monitor the flames when he went inside, as long as I followed orders to Stand Back. My brother and I would play a game in which we each would pick a spot in the unlit coals and declare that “our house.” The owner of whichever house was the last to burn was the winner. What can I say, dad was a fireman and we were obsessed with it.

But that was another era. Back to this century, I still stand vigil but without the joy of watching my brother’s house burn. Once the grey ash crowns 80% of the coals, I place the apple wood packet on, fill the water bowl of the grill (never knew THAT was part of the smoking process!) and onto the rack goes the meat. Cover on, I stand back. It’s going to be a long wait. It’s now 10:30 AM.

The guide book says a 4 to 8 pound butt should take 10 to 12 hours to get to temperature. This one is a full shoulder and nearly 10 pounds. I am guessing the movie is out we had planned to see this evening. For the next several hours, I resist the urge to peak at the meat and content myself with adjusting carburetors to keep the temperature near 250 degrees and checking once to make sure the wood isn’t burnt to dust.

But after three hours, a few questions are starting to occur…… If I see no smoke, do I need to add wood? Did I use too much or not enough in the first place? At what point should I start checking the meat temperature? Should I be expecting to have to add charcoal? Would Avatar have been as impressive without the 3-D effects? I become obsessed with the issue of adding wood. So despite my male predisposition not to ask for directions, I give in and call One Of The Guys and left a message. To be on the safe side, I went ahead and began soaking more wood.


This all became problematic at 3 PM. The instruction book says to check your charcoal at +4 hours. I guess they meant it. At 2:30 (+4) I checked the thermostat and it looked fine. I did NOT look at the coals, fool that I am. At 3 PM, I checked again, and the thermo was at about 200. I checked the coals, or the mostly dust that used to be coals, pulled out the foil pack and threw in half of the remaining bag of briquettes. I opened the foil to see that the bet of the wood was long gone so I quickly drained and packed the next load of wood chips and threw it on top of the newly introduced charcoal. And watched the thermostat. 200… 205... 210... 200… 200… 200… 205… 210… 215…..rescued. And I add hot water to the water pan, which is looking pretty low as well.

So apparently they are serious about the four hours. 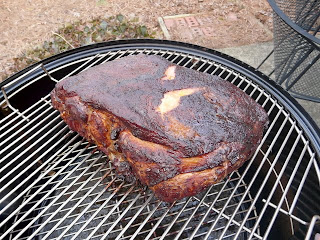 But now I can see that I may need another bag of charcoal. And The Queen mentions we need something other than meat. Maybe slaw? Buns? Fries? Anything? So it’s going to be Back To The Store for someone. Like I said, I didn’t plan this out too well.

And so with new coals I need to once again play constant temperature games with the smoker. Touchy little bugger. At least I am seeing smoke again. And what the hell is going on in there? As the time reaches 4:30 (+6) I still haven’t taken a look. Maybe it’s burning up. Maybe it’s falling apart. In an hour, I’ll take the meat’s temperature. I content myself with wandering into the kitchen and tasting the sauce from last night. The Queen and I agree, it has lost a little of its edge but the cayenne has now blossomed a bit. She puts me on notice that she’s going to use the Short Sugar’s sauce she brought back from North Carolina on her last trip. Short Sugar’s is my mind the Holy Grail of western NC barbecue. I was first introduced to it when Kim and I were courting and went to visit her grandparents. With Richmond Virginia being the only BBQ I had ever previously tasted, I thought all BBQ either tasted like Bill’s or Dunn’s (two local drive ins that I now learned had been completely screwing over their patrons by putting a thin spread of tasteless minced meat on a bun and charging a fortune – that is what Richmonders knew as BBQ) or came out of a can from a company called James River. James River canned BBQ was this metallic tasting cloying shredded stuff that was mixed with a paste that is reminiscent of that ersatz sauce that barbecue flavor Vienna sausages was packed in. Do not hold it against me that I know what that tastes like. Disgusting. I still remember the cartoonish black waiter on the can and his pearly white smile in a deep brown face. And I remember thinking even as a child that the taste in the can bore no resemblance to the feast that the happy gentleman promised. So when I tasted Short Sugar’s I was instantly converted. I had never tasted anything so good. Wood smoked, moist, smoky, and plentiful on the whitebread bun, with the perfect thin vinegar sauce. If my novice effort at sauce has to be jilted for another, I do not mind losing out to the best there is. I am thinking I’ll have two sandwiches this evening, one with this stuff I made (got to dance at least once with your date) and one with the Short Sugar’s as well. That assumes, of course, that this smoker delivers at all.
Posted by Kim S. at 7:50 PM