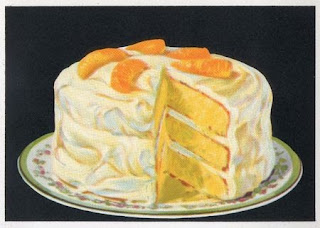 I have been cooking for almost as long as I can remember. Fat kids learn early that when they are alone in the kitchen, the world is their oyster (or their Baby Ruth bar). You can go to the store and buy all kinds of things and somehow, no one ever asks why the bag of Cheetos never makes it to the table. Anyway - I've been seriously cooking for probably 30+ years. And for at least that long, I've been searching for the perfect yellow cake. I have a number of great chocolate cake recipes, a good gingerbread cake and one really killer coconut cake. But yellow cake has been my nemesis (not to mention the even more elusive perfect white cake). I eschew mixes. That is to say that I don't WANT to use them. But, back against the wall - I've gotta have a yellow cake, I have been known to resort to what I call "cake mix fix ups". The Anne Byrn school of pastry making. She's that "Cake Doctor" lady. And I'm not making fun of her, either. She's saved my buns a number of times. But I want to make cakes from scratch. I just think that they taste better. And let's face it; it's an ego thing with me - making things from scratch.

What I've been searching for all these years is a cake that tastes like homemade, but has the texture of a mix. I just love the tight crumb that is the mark of a mix cake. So over the years I've tried cake after cake. One time, I even made THREE different cake recipes over a weekend and three batches of the same icing (for testing purposes, of course) and took all three cakes into work for a taste-off. Not one of the three of those was up to snuff: 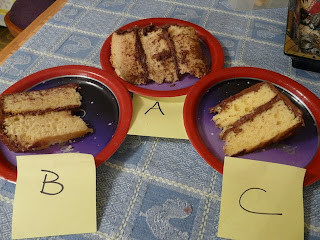 Some of the recipes that I tried over the years were OK, some horrible - so bad that you wondered how someone could have recommended them. I’m sure that all the folks at Cookskorner and eGullet are sick of me whining about this and tired of sending me recipes that just aren’t right somehow. Just recently, I got very excited about a recipe that was recommended for making your own cake mix. You mixed up a large batch of dry ingredients and cut in butter. Then you could refrigerate it (or freeze for longer storage), take it out when you were ready for cake, add the wet ingredients before baking and bake it off. You could add various things and make a chocolate cake or spice or whatever. I was enchanted with the idea of a freezer full of MY OWN CAKE MIX. I was so excited as I prepared my first batch. I was concerned that the bits of butter didn't seem to really mix into the batter. I think that they never got a chance to cream into the sugar and flour. The cake was terrible. Sodden with the texture of an EXTREMELY healthy muffin. Giant airholes surrounded by gooey (NOT in a good way) 'cake'. Blah.

I was so enamored with the idea of that freezerful of mixes that I decided to give it one more try, only this time I decided to use oil instead of butter, thinking that it would blend better. I got a better texture, but no flavor whatsoEVER. I shoulda known - if something tastes of ass with butter what's it going to taste like withOUT it? It looked fine: 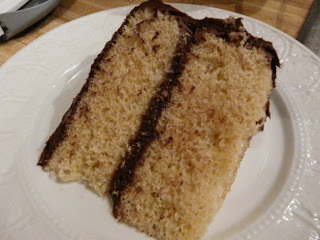 But the crumb was really coarse. And the texture was very bready and sodden.

Just a couple of weeks ago I found what I thought might be ‘The One’. It was recommended at eG and the person who came up with the recipe described it as a combination of a pound cake and regular yellow layer cake. I put it together and baked it. I checked it when the timer went off and decided that it needed a few more minutes. Somehow, I got distracted and forgot to reset the timer. I definitely overbaked it. BUT I really liked the flavor and texture – it was just a little dry: 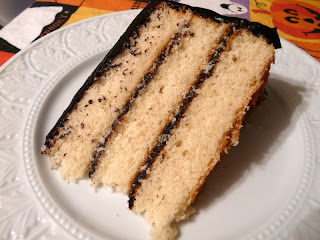 I knew this one had real possibilities. I even put it on my recipe webpage as “Go-To Basic Yellow Cake, Maybe” (real confidence, that). Then I made it again. I didn’t overbake it. And it was somehow not as good as the original one. Sigh.

Currently I am disgusted with yellow cakes and vow never to try to make one from scratch again. I say I’ll just continue to do the Anne Byrn specials. But I know myself. I’ll try that last one again, to see if I can improve it. I’ll be seduced by another ‘can’t fail’ recipe. I’ll be taken in by the siren song of the promise of my foodie friends.

On the other hand, I finally make a killer peanut butter cookie. After 25 years of tweaking. 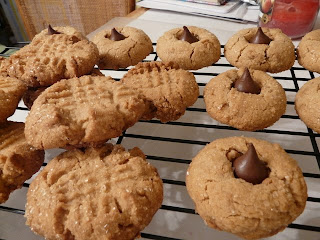