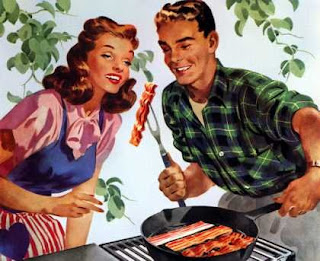 I am in possession of something that is life changing. I have a jar of Bacon Jam. BACON JAM. Just look at those two words. It sounds intriguing and insane at the same time. It sounds impossible, but I have some. What’s more, I made it myself and now can have it any time I wish. This may be a problem.

When something new comes on the food scene, you start hearing little mentions of it on the food websites. I can’t remember exactly who mentioned it first, but I think it was on eGullet. Being a fan of all things porcine, I perked up and Googled it. It seems that Bacon Jam was the brainchild of a diner called Skillet Street Food in Seattle. Yes, Seattle. I know, it seems weird to me, too. Salmon jam? Sure. Coffee jam? Maybe. But Bacon Jam? Shouldn’t the birthplace of Bacon Jam be somewhere in Mississippi or Arkansas? Anyway, there it was. You could order an 8 oz. jar…for FOURTEEN DOLLARS!!! Plus S&H, of course. That seemed a little excessive to me. So I kind of dropped it, but it never left the back of my mind.

Recently on eGullet ‘kayb’ has been making it and using it on all kinds of things. When I whined about wanting some, she kindly posted the recipe. Then my friend (and fellow eG’er) Jerry did a food blog last week and HE made some – with accompanying pictures! That sent me right over the edge. I had to have some. We didn’t have any of our favorite Benton’s bacon, so we went to the Fresh Market and got some Nueske’s. (By the way – Benton’s bacon is astoundingly good bacon, the best we’ve ever had. We usually order multiple pounds when we get it, but they are a little slow to deliver. They’ve been featured in a lot of food magazines and websites and are seemingly overwhelmed with orders. It can take up to a month to get an order – so we run short sometimes.)

You start by frying a pound of bacon (all recipes should start with this instruction): 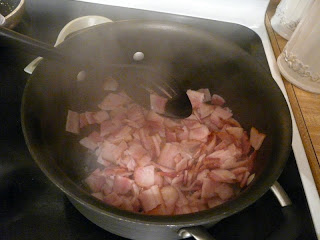 It should be crisp on the edges, but still soft – because you are going to be doing a LOT more with it: 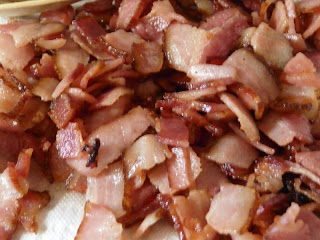 Then you set it aside and dump in some sliced onions and brown sugar: 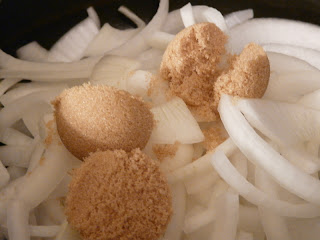 Cook until the magic happens: 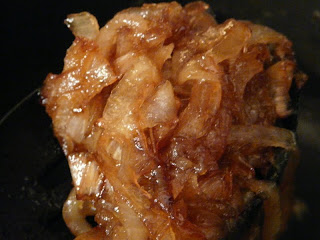 You knew where I was going with this, didn’t you?

Then it REALLY gets good: you add garlic, allspice, cinnamon, nutmeg, cloves, chipotle powder (I’m a big sissy – so I used ancho chile powder) and paprika: 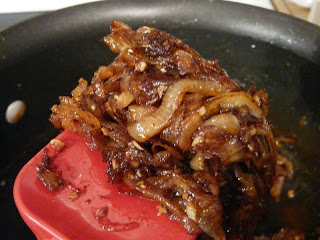 The smell in my kitchen at this point is amazing – a heady spicy bacon fragrance. Dogs are scratching at my back door. Neighbors are leaning out of their windows. Low flying helicopters.

Now the jamminess starts. Dump the bacon back into the onion mixture – add coffee, apple cider vinegar, bourbon (I’ve confessed before to losing my G.R.I.T.S. card due to the fact that I HATE bourbon – I used apple juice, but cider would be better), maple syrup and hot sauce: 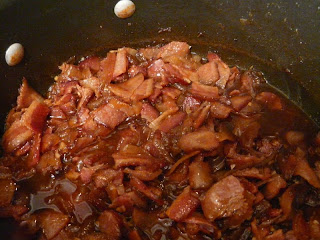 Then it simmers – for TWO HOURS. That fragrance I mentioned? It gets STRONGER – richer and deeper. I think the air in my house actually THICKENED. 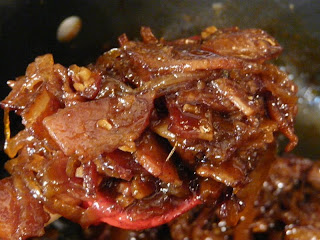 At this point, I was eating it from a spoon. But to actually finish The Jam, you give it a ride in the food processor: 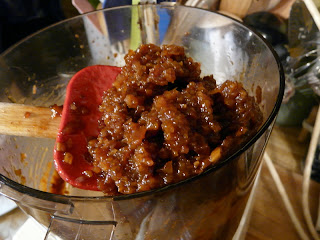 The Jam is best served warm. Here’s one way to serve Bacon Jam: 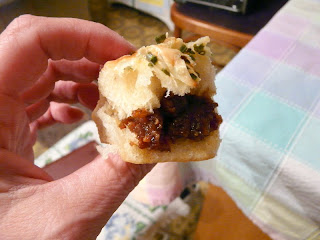 That’s just a Sister Shubert roll tarted up with butter, Cheddar and chives. Jerry makes these gorgeous little cheese/herb biscuit poppers to slather with The Jam, but this was a Monday night and I barely manage to brush my teeth Monday evenings. We are thinking Bacon Jam and sunny side up egg breakfast pizza. How about The Jam brushed on burgers? Or breakfast bruschetta with The Jam and tomato preserves. Or Bacon Jam caramel corn (Mr. Kim boggled at that one). The possibilities are truly endless.

If you want to try it for yourself (and if you don’t, you may need a check up), you can find the entire recipe here. 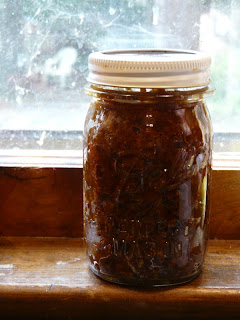