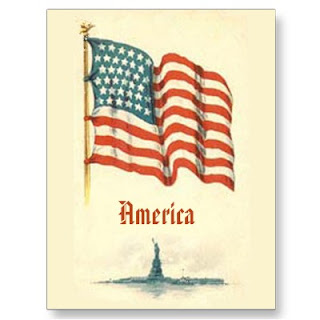 There are folks out there that I call the flagwavers. They show every sign of being very patriotic. They have American flags on their cars, they fly the flag at home (and didn’t just start after September 11th), the men wear little flags on their lapels. When you listen to them talk about our country they can sound a little belligerent.

I am not really much of a flagwaver. I am proud of my country in many ways. Of all the flawed systems of government out there, I think that ours is the best. And I am amazed at the social progress that we have made in a short 200+ years. I mean when you look at the ancient civilizations out there that still curtail civil liberties to certain groups of people, it makes our problems pale by comparison. And every four to eight years, I am full of admiration for the people of the US – administrations come and go without riots, without military assistance – there may be some grumbling (or an occasional appeal to the Supreme Court), but our change of government happens peacefully. It would be unthinkable for it to be otherwise. I find much to be discouraged by in our government, politics, social discourse and debate. But I also find much to be encouraged by.

But back to the flagwavers. My question to them would be: I know that you love our country. But HOW do you love it. Do you love it like you love your favorite football team or like you love your child. Loving a football team means cheering it on – wanting it to win at all costs. If that means a little cheating, being a little more cutthroat and brutal than the rules really allow, hiring a thug because he’s a fabulous quarterback – then that’s ok with you, because winning is all. And, after all, it’s just a game and doesn’t really matter much in the grand scheme of things.

Loving a child is, of course, different. You adore you child and would die for her. But you have an obligation to a child. To make sure that she is responsible, moral and good in her actions. If she cheats on a test, you don’t look the other way – you make her face up to the consequences. If she bites another child because she wants what that child has, you correct her. If you see that she is going down the wrong moral path, you do everything in your power to steer her away from that path. If you don’t, you aren’t a good parent. Being a parent is being a caretaker of a soul. It is the greatest responsibility in life. Being a citizen is, perhaps, the second greatest.

So, which is it? A football team – “my country – right or wrong”. Or a child, a sacred responsibility – “My country, right or wrong; if right, to be kept right; and if wrong, to be set right.” Both express love, but only one recognizes the obligations that it imposes.
Posted by Kim S. at 8:57 AM