Mr. Kim drives (and Blogs): Terror In the UK 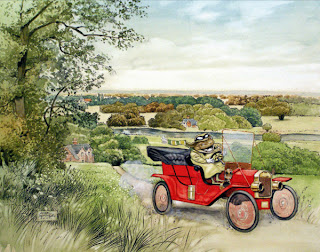 Pardon the interruption. There are aspects of this trip that cannot be described in a way that neatly fits Kim’s narrative so well, so allow me a sidebar entry. I’d like to share a word or two about driving in England.

First, there are these terrifying thrill rides called “roundabouts.” I’ll say this for the British, they have found the solution to sitting in traffic at red lights. We stopped very few times the entire trip – just yield, roll, and go. This sounds great to every American I have told the tale to. Then I tell them what Paul Harvey used to call “The Rest of the Story.” Roundabouts…… multilaned circles from hell with two to five streets feeding into them at random angles and exits with signs written in 12 point font. The traffic already in the circle is limited by law to the drive no faster than the speed of light. Traffic trying to get INTO the circle has just one basic rule – “if you can get into the circle without having an accident you must have had the right of way.” Ah, but the alternative of waiting until it is safe to enter is nearly as perilous as just diving in, as the Brits behind you are not expecting you to stop and display all too Yankee an attitude if you dare to tap your brakes in the process. The only times I ever got beeped at in all of England were for stopping or slowing down where I was expected to just kamikaze my way into the flow.

Once you are into the circle, you realize you still have half the battle ahead of you. As I said these are multilaned creatures. Unless you are taking the first available exit, you are required to jump into one of the center lanes, as the outermost is only for exiting and the outer lane frequently just disappears into the exit, with a new inner lane apparently spawning to replace it. But when it is your time to exit from this circle, you must somehow make a move that would make a quantum physicist proud, instantaneously disappearing from the center lane and passing through all the cars in the three lanes ringing you to reassemble in the outermost lane, in time to jerk the wheel and veer into the outflowing street. I never had time to notice if we changed polarity in the process.

After a few of these (and we probably ended up driving a thousand of them, large and small, over the course of the trip) I began to get the hang of it. Then it became a matter of figuring out the most effective way the scare the bejesus out of Kim at each roundabout situation, just for fun. Sometimes it was a matter of not slowing down at all and blindly dodging into my lane. Other times it required multiple lane shifts for no apparent reason. The most terrifying and therefore most entertaining turned out to be just a rapid glance to the side accompanied by a quiet gasp. Quite a game. Keeps the marriage fresh. At any rate, I never hit anyone so I assume I passed the road test.

Next issue: Signage and road markings. We saw very few, if any, stop signs. You are expected to keep your eyes on the pavement for stripes that are no more noticeable than the ones we are used to seeing at red lights to tell you how far you can creep into the intersection. Lines, no signs. Miss it and you risk…. Whatever the British do about such things. You are just assumed to have superhuman powers of observation. This is more importantly required at the rarely seen but sacrosanct pedestrian crossings. Again, no warning they are upcoming. Just more lines on the road, but at least for crosswalks you can see on the sidewalk yellow globes positioned on street light poles. If, that is, you are watching the sidewalk for them rather than staring at the pavement looking for a stop sign line. Craig pointed one of these out to us on our first day as pedestrians in London, warning us that cars MUST STOP HERE but anywhere else pedestrians were fair game. When the shoe was on the other foot and I was the anxious driver rather than the London pedestrian, I found myself slamming the breaks and retrieving my teeth from the dashboard rather than violate the Law of the Yellow Globe.
There are streets with arrows painted on the roads, pointing back the way you came in your lane, for no apparent reason. More than once we thought were going the wrong way. Turns out it means Yield. Again, no sign, just a squiggle on the pavement. Likewise, No Parking zones are completely mystifying. Some streets are bordered with one solid line, some two, some yellow, some white, some unmarked by anything at all. Cars park at will on all of them. Or don’t. And they park facing either direction on either side, which is hell when you are trying to figure out whether you are one a one way street. On one particular day I did feel very lucky to find a spot to park very near the restaurant in Cirencester where we ate our last breakfast in the Cotswolds. I parked along the left side, right behind four other vehicles. They must have all gotten a memo about the time of day when this privilege expired, as they were long gone when I retrieved my $70 parking ticket. Again no signage. I did spend a half hour that evening reviewing the official driving manual for England as issued by their DMV. Nowhere did they provide a Rosetta Stone to decipher these strange stripe glyphs. Ah well, I seriously just shrugged and figured if this was the worst thing that happened while driving in England I was ahead of the game.

And then there are…. Pedestrian malls. Wouldn’t you think that an area that looks like a road and flows directly from a road but that is for people and not for cars would have some sort of Do Not Enter sign? Yes, I would think so too. That’s how I ended up driving on one. Okay two. The good folken walking along the boulevards did not seem to mind me being there – no New Jersey-esque pounding on my hood – but neither did they deign to get out of my way to let me pass. They just strolled, glancing back at me only once per person, content to shop and chat and enjoy the day. And I just eased through, 1 mile per hour at a time, hoping that I did not come to the top of some flight of steps.

Have I mentioned the cameras? There are apparently only three police officers in all of England guarding the highways. They do not need more, as every mile or so you enter a camera zone. Radar guns are mounted alongside cameras taking NASA-precision shots of your face, license plate, and dental work. They just mail the ticket to you. Even in a rental, you are not safe. The rental companies have already got a deposit on file in case of offense and a credit card to back it up. Speed traps occur with regularity, dropping the flow by as much as 30 MPH on no notice. Fortunately for us, this never affected our travels as I was never in danger of approaching the posted speeds. Terror sometimes has its advantages.

Finally, the British are just !@#$ nuts when it comes to speed limits. Okay, I can buy the idea of 70 MPH on the M roads, the equivalent of our interstates. I do not allow that this speed is proper when entering one of the aforesaid roundabouts, although I did eventually master this maneuver. But every other non-inner city road was at least 40 MPH, and most were 60. This would include roads that were wide enough for 1.25 cars, with stone walls instead of shoulders, two way traffic, blind curves – and 60 MPH postings. This occurred EVERYWHERE. Rural, town, no matter. Just bust on along or get pushed from behind sometimes. If you meet an oncoming vehicle, pray he is also a terrified American tourist doing 30 in a 60 and then back up to a driveway to let him pass.

All in all, I think I got it all pretty well down. Not even any near misses to speak of. Yep, I am a master of driving like a Brit. Just in time to return to the US and what had by then become the wrong side of the street. At least I was used to ignoring all the stop signs.
Posted by Kim S. at 6:00 PM