Not the only Wackaloon in the World 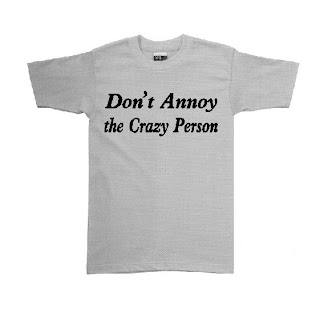 We all have crazy stuff that we do, say, feel, etc. Of course, when admitting to our own idiosyncrasies we see them as charming eccentricities. It's those other people who are wing nuts. But secretly, I think that we all wonder if anyone else shares our odd little quirks and find it comforting if they do. I found a wonderful thread on Salon.com called "I can't be the only one" that addresses this issue. I am not sure if the fact that I identified with so many of these confessions comforting or alarming. But they are hilarious:

I CAN'T BE THE ONLY ONE (from Salon.com)

Who, after shutting of the basement light, has to physically restrain herself from running up the basement stairs to escape the ax murderer lurking below.

Who refuses to keep her eyes closed more than a few seconds while showering at night (making shampooing a little difficult) just in case Norman Bates took up residence in the guest room?

Who won't let my hand hang over the edge of the bed for fear that something unholy will bite it?

Who will be at a banquet, party, etc. and feel great just chatting away with people, felling like I am really connecting and having fun and suddenly feel awkward and start wondering if everyone thinks I am a blabbering idjit?

Who has to rub my feet together while going to sleep. It's hell when I have a sprained ankle, but I do it anyway. My sweet hillbilly grandmother used to call it "makin' biscuits".

Who, when vacuuming over a paper clip on the carpet 50 times in a row, will pick it up-and then drop it again, like to give it another chance.

I like to sing in the car, but I stop when there are other cars near me.

In my world, all the psycho-killers and rapists are waiting for me in the back seat of my car, but only at night. I check for them.
When seeing Volkswagen beetles and there's no one I know around to hit, I discreetly punch myself.

I won't change other people's toilet paper rolls, but I know what the right way is and I will take note of their inferior toilet-paper roll mounting skills.

Lunchmeat mustn't ever be put on a sandwich flat. It must be folded over so it's fluffy and loopy. It looks better, tastes better and your glutton self thinks you are getting more.
I am 38 years old and I still have to fasten my bra in front, then slide it around to the back. My boyfriend thinks this is hilarious.

Our dad, who was in the navy, tells us stories of swimming in 8000 feet of water. And I swear, the creepiness goes down our backs the same way every time we hear. It's awful.

My boyfriend has a thing about big water tanks, or any large body of water with a drain in it. He doesn't even like to drive past them.

My feet need to be 'open' [when I sleep]; anything else can be covered. I once borrowed a pair of footie pajamas from my sister-in-law and was almost homicidal. I would have been more comfortable with a bag over my head.

On the subject of public toilets, I get SO mad when someone comes in, and if any other stalls are free, still chooses to come into the one next to mine. WHY? This is not a situation for bonding. If possible I will always go for the stall on the end of a row, as far from the door as possible, and still they find me.

Who gets the full fledged creeps - hair standing up on the back of my neck, heart pounding and everything - as I fumble for my door key to let myself inside before the serial killer who is coming up behind me can grab me. This happens anytime I'm alone and it's dark, no matter if it's 6pm or midnight.

Who wants to be sure to lock the car doors when I'm driving downtown and some weirdo is walking by the car, but I don't want to hurt the weirdo's feelings when he hears the 'clunk' of the car's locks.

Who worries about their garbage disposal, for example, that when sticking one's hand in the disposal area to dislodge something, it will suddenly turn itself on and chew up your hand.

Who, when getting up in the darkness after a nightmare to use the bathroom, refuses to look in the mirror because I might see a monster or ghost reflected in it.

Anyone brave enough to share?
Posted by Kim S. at 1:09 PM