My Daughter the Drag Queen 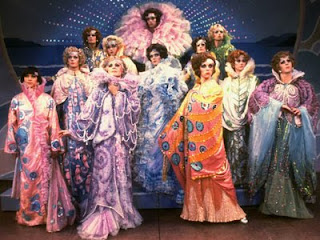 The Child is a social butterfly. She has work friends, karaoke friends, high school friends, college friends, etc., etc. Many, many of these friends are gay men. What can I say, like mother like daughter. I, too, bore the half epithet-half honorific "Fag Hag". I spent many of my weekends in high school and college at gay bars and specifically drag shows. And I was surprised when my former fiancée came out. I have impeccable gaydar - except for that one time. The "ladies" enjoyed dressing me up and doing my hair and makeup - I was like their own personal living Barbie. They loved my long hair and smooth skin and real boobies (such as they were). Of course, drag queens aren't known for restraint, so when they 'did me up', I ended up looking like....a drag queen. An amazingly feminine one, but a drag queen. Once, in the rest room, one of the ladies said I had beautiful skin asked who had done my electrolysis?

I said all that to tell the story of how I ended up spending the last two Thursdays and will spend this Thursday (The Child's 27th birthday, BTW) in a drag bar. In understanding this story, it will help if you are aware of the cable show RuPaul's Drag U. Of course, if you are only AWARE of it and haven't ever actually WATCHED it (like me) you may end up as confused about The Child's involvement as I was at first. Seeing only commercials, I always thought that the contestants were budding drag queens - i.e. men. According to Wikipedia, the contestants are average women who "compete in a series of challenges to unleash their inner diva". OK...now it makes sense that The Child (an actual female, if not actually average by ANY measure) would be a contestant in this local version. I am truly a dim bulb when it comes to current culture. And I have been for a while now. I am MUCH more familiar with songs and musicians from the 1940's than from the 1980's. I could not name one Duran Duran song if I were tortured.

So, are you still with me? The Child was asked to be a contestant in the first ever Richmond version of Drag U at Nation's Bar. Since I was confused about the whole Drag U gender thing, I couldn't get my head around why she was doing this - other than the whole fun part. But, really, do you need any other reason to do something when you are in your twenties and single?

Week one was a complete triumph! She was ahead during the entire performance. One of the judges told her that she was making his job very difficult since he was supposed to give her pointers about improving for the following week and he didn't have any to offer. The theme of the night was Dolly Parton and my girl and her already gigantic gazongas augmented even further ruled the night. 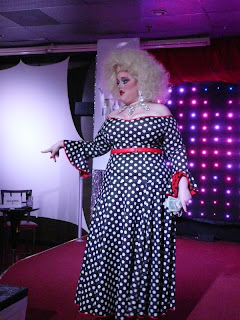 Is she gorgeous, or WHAT??

Here she is dressed for her second number of the night with the other ladies: 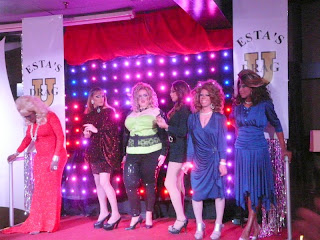 It was a lot of fun - full of laughter and silliness and memories. And reader…she WON!

Second week, different judges. Comedy was the theme – all the girls did parodies of current songs (none of which I recognized, so the effect was a bit lost on me). Here’s her costume for the first number: 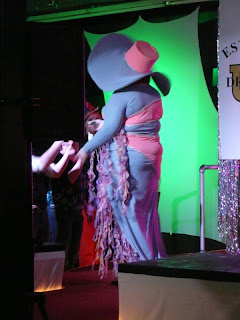 I never got a good shot of her face in this one, so you are missing the incredible Jessica Rabbit red wig. But, oh, that HAT!

Here she is in her second costume: 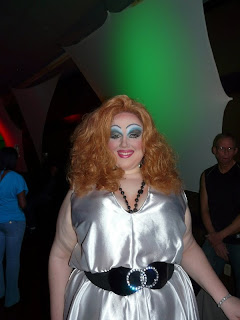 How about that make up? THAT is classic drag queen. A cross between Divine and Ursula the Sea Witch.

Momma and her drag queen daughter: 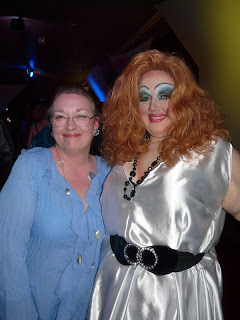 She was adorable, but one of the other girls came out with an amazing number and just played the crowd and stole the show. And one of the judges made some comment to The Child about how she shouldn’t let her drag Momma’s fake boobies upstage her real ones. (!!!!) I took him out to the parking lot. Not really. But I wanted to. Grrrr. The wonderful Andrew (a best bud of The Child’s and one of my honorary sons) said, “Did he really just say that fake boobs are better than real ones?” I never loved him more than at that moment.

So tomorrow is the last night. Not to mention her birthday. Wish us well. What a weird little family we are.
Posted by Kim S. at 10:34 PM