Some Corrections and a Confession

I got a great email from my cousin Butch (Aunt San’s son) and he gave me some information about the origins of the cooky jar that I showed in my last post: 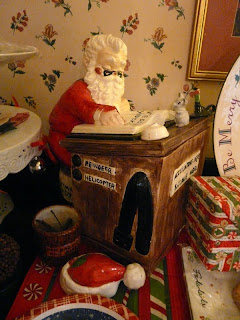 One thing that I did was to misspell my family name – it’s Tirelli, not Terelli. That was just a typo. But I got the name of the maker wrong, too. What threw me was the name “Antonia Tirelli” on the bottom of the jar. The sister’s names, as I knew them were: Mary Rose (not absolutely sure about this one – but she was known as Dink), Ada Louise (Tut), Ruth Ann, Clarene Ann (Aunt San) and Pauline Louis (my grandmother, Bomo - that IS Louis, BTW – not Louise with an E – named after two uncles). So ‘Antonia’ threw me a bit. I figured that it was Tut, the piss-elegant sister, who must have come up with that name. But Butch corrected that assumption. He says of Ruth: “Ruth started out, I think, as Ruth Ann Tirelli. Somewhere along the line it morphed into Ruth Antonia Thurman Tirelli, I think. I definitely remember 4 names for her in her later years. When we would visit we always went fishing. Ruth had a very large straw hat that she wore fishing and always had a long cane or bamboo fishing rod with a bobber on the end. It was great fun for me as a kid. She always had a loaded shotgun in the corner of her bedroom also.”

Butch also reminded me of Aunt San’s legendary eggnog: “Don't forget about Mom's Egg Nog. I do not believe she ever, to my knowledge, used less than a fifth of Old Granddad in it, except what she saved for the kids.” Since I was one of the kids, I never had the REAL eggnog. As I’ve mentioned before, bourbon is not one of my favorites, so I probably wouldn’t have appreciated it anyway.

He also gave me a bit of a tease: “Someday I'll tell you about maybe the funniest and possibly the one of the best Christmas' ever, in Merrifield, VA. It was one hell of a good time. As best I can remember all the sisters and husbands were there, I'm not sure about "Tutsie", and what a time it was!!!” I can’t wait to hear THAT story! Butch was also the only one who ‘Christmas Gifted’ me this year – and it was the first time it had ever been done by email!

Butch’s email meant a lot to me. I appreciate all of the folks who come here, but I didn’t know that anyone in my family came and read. To know that some do and to be given more family stories is a real gift.

Now for the confession. After all of the wonderful responses about my beautiful Christmas house, I was feeling a tad puffed up. You know – yes, yes, I have such a lovely home; I am such a wonderful homemaker, such an organized hostess, blah, blah, blah. Then this little voice whispered, “But you didn’t show it all”. Hmmm. This is actually true. No one sees the mess that usually rules here. I don’t show all the boring, pick up meals that are the norm. And I certainly haven’t ever shown the chaotic process by which I arrive at those rooms that everyone has been so kind about.

So here it is, warts and all. Living room, partway through the process: 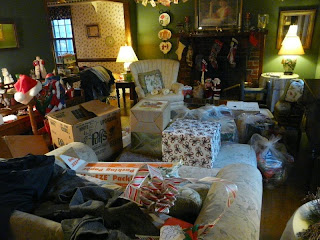 And in the spirit of total honesty – in the foreground, on the chair back is a pair of jeans. Downstairs…nowhere near a drawer or a washing machine. I have no idea what they are doing there.

The other end of the living room: 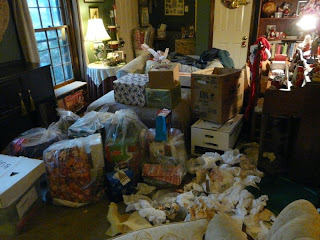 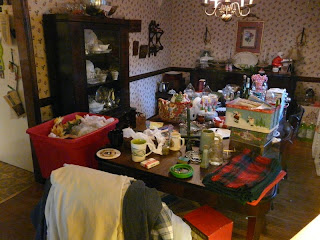 And – more honesty here – a LOT had been accomplished before I thought to take these pictures. It looked much, much worse before this.

As Ree would say, “Just keeping it real”. Martha, I am NOT! 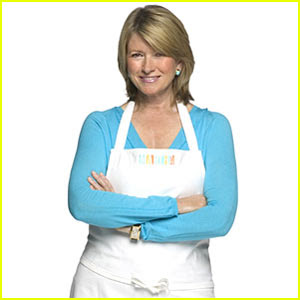