To see a food-centric report (including food pictures) of our NOLA trip go see my post at eGullet.org: http://forums.egullet.org/index.php?/topic/132663-our-nola-trip/ (copy and paste it, since the linking icon doesn’t work).

March 19 - Richmond to NOVA to NOLA
Our gustatory journey got off to an inauspicious start with dinner at the Applebee's at the Richmond airport! We had decent salads and execrable clam chowder. How can a restaurant have soup that is worse than Campbell's? My FIL & MIL dropped us off at the airport. Took off on time on a quick jump to Dulles (which I thought was National until we boarded the flight to NOLA - during the whole landing process I was looking for the Washington Monument!).

Mr. Kim: The cab ride from the airport was 15 miles but the driver was able to use the deserted interstate to practice for his next career at Indy. But we took advantage of the lack of company to grab quick peeks at cemeteries flying by, and we caught glimpses of the superdome and even the French Quarter Trailer Park, replete with a large and welcoming sign at its entrance.

Arrived at our hotel in the French Quarter - The Place d'Armes. Nice room, a bit dark owing to too few eco-friendly light coils of minimal wattage. But all in all, a charming hotel with a beautiful private courtyard w/ pool and balconies: 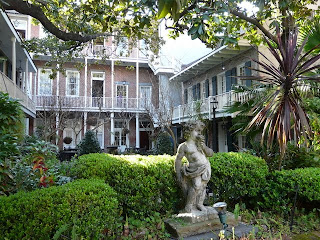 The Child had sent us a bottle of Champagne! Sweet girl of mine.

Straight out to the Cafe du Monde for beignets and cafe au lait. It was a soft, nice evening and perfect for people watching. The beignets were hot and sweet and mounded with powdered sugar and just the perfect bedtime snack. It’s open 24 hours a day and I threatened to come down for a snack every time I woke up!

Started off with very blah croissants in the lovely courtyard of the Place d'Armes. Seriously - not as good as a grocery store. But the day got much better and we never bothered with these inferior breadstuffs again! Our room is very small, but nice and clean and with a bit of charm. It's also very quiet. We are just down the street from all the Bourbon Street craziness, but the room was totally silent. Plan for the day is a walking tour of the French Quarter, Galatoire for lunch and Besh's Luke for dinner. Our walking tour was just the one that was in what we started calling the "Big Book" - Frommer's New Orleans 2010. The "Little Book" was the Lonely Planet New Orleans Encounter. We had a lovely (and exhausting) wander around the French Quarter and were astounded by the beauty of so much of it.

Mr. Kim: We were struck by the “mixed use” of the Quarter stores. Bourbon Street aside (that is primarily set up for the animals, the crazies, the revelers, and the letches) the rest of the Quarter was an eclectic mix of touristy gotcha shops right next to ultra-high end antique stores next to eateries of every level. And our eyes were constantly being drawn upward to the character of the city as captured on the second, third, and sometimes fourth floor balconies and windows. In most places, including our own beloved Richmond, older buildings may have storefronts on the street but the higher floors are uninteresting and usually abandoned to either storage or dust. Even in those places where they are still in active use as residences or business annexes, there is nothing to compel your eyes to drift there from street level. In New Orleans, it was unavoidable. The residences proclaimed their presence in hanging baskets and flags and beads on railings and other human insistence on recognition. (You easily could tell which were owned by the sedate gentry and which were standing by awaiting the next opportunity for frat boys to stand and throw beads to wayward women.) And the businesses with second floor presences were equally obvious, although most of these were bars and worse. Our “tour” stopped several times in each block, explaining that this house or store was owned by this or that important person and was used as the first bank or first school or first courthouse, and that the ironwork was ORIGINAL and to note its ornate features. I have always been touched by permanence of places and things, being easily impressed by knowing that something happened HERE or that this structure existed and was important to someone decades or centuries ago. So a block by block accumulation of this was almost overwhelming.

Our walk was interrupted by lunch at Galatoire and 2nd lunch at the Central Grocery. New Orleans is probably the most beautiful city that I've ever seen. The buildings are just so perfect with French and Spanish influences and that gorgeous patina that only time and just the right amount of loving neglect can supply: 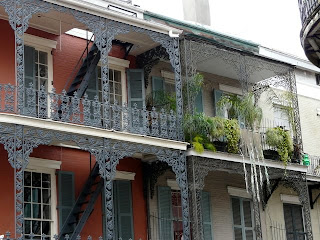 Thank God that no one has succeeded in 'renewing' New Orleans - at least the parts that we saw. I don't know if the city was just too poor when that movement was in its heyday or if the people in power knew what a jewel they had, but it is a gorgeous city that doesn't need any tarting up. Its beauty is in its historical streets and buildings and its people. At one point, I said to Mr. Kim that I remembered after Katrina many people saying that it wasn't worth all the money and effort to restore and rebuild. At the time, I wondered if they were right. I am the first person to say, when a neighborhood has flooded for the 10th time in five years, or when wild fires sweep through somewhere on an annual basis, "Do they NOT understand that God is telling them to MOVE?". But being in New Orleans, you realize that YES, it is worth it. The history and the spirit of the people deserve that respect. New Orleanians are friendly and knowledgeable about their city and seemingly eager to share it with visitors. They are still over the moon about the Saints winning the Super Bowl - every house and shop and restaurant has New Orleans Saints signs and flags! 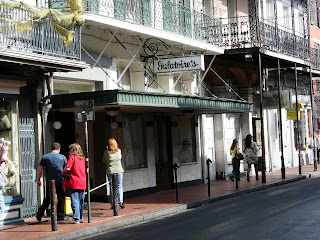 This is a wonderful, historic restaurant. It opened in 1905 and has been run by the same family all that time. It was Tennessee William's favorite and he even sends Blanche and Stella there during 'Streetcar'. It's a beautiful place - light filled with dark green wallpaper. Very southern and classic: 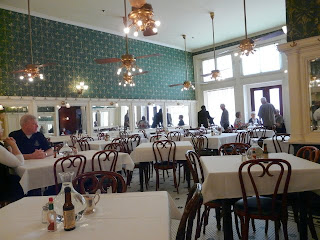 Seersucker suits and ladies in hat would not be out of place. They keep a rack of jackets for gentlemen who are eating upstairs and have forgotten their own. We ate the kind of food that is deceptively simple - impeccably fresh and perfectly prepared. New Orleans surely does deserve its reputation as a food lover’s heaven! I told Momma that growing up on the Eastern shore, I thought I'd tasted the best seafood, but the stuff we had in Louisiana beat everything.

At lunch, we started with cocktails. We don't often, with lunch, but it seemed appropriate! I got a Sazerac - a traditional NOLA drink. It's supposedly the first cocktail served in the US - concocted in the 1830's by Antoine Amédée Peychaud (of bitters fame). It's made of some combination of sugar, rye, Cognac, absinthe or Herbsaint and bitters. I am not usually a consumer of things that actually TASTE of liquor (I like all the fruity stuff and vodka drinks), but I kind of liked it - probably only because I was in New Orleans, sitting in a restaurant I've been dreaming of for years! We just ordered a bunch of stuff that folks at eGullet.org had recommended and 'fell to'. We had the puffy soufflé potatoes with béarnaise. These were amazing - they look like golden wedges of potatoes. What you don't realize until you bite into them it that they are completely hollow, with a crisp crust of almost potato chip-like shatteriness (my blog - I get to make up words). The man at the next table, who seemed like a knowledgeable native, was explaining them to his guests and said that they are made by slicing EXTREMELY thin (a mandoline, I guess) and soaking in ice water, then frying in hot fat. I want to try this. We also had the oysters Rockefeller and shrimp remoulade. I can already see that I am going to be repeating myself in my NOLA report. I have gotten to our first sit down restaurant meal and already run out of superlatives. The oysters were phenomenal - fresh and sweet and the topping herby and not at all gloppy or overpowering, like some I've had. Even Mr. Kim, who hasn’t put an oyster to his lips in decades if he could avoid it, loved them and ate them with relish. The sauce on the shrimp was great - spicy without too much heat, but what was really the best part was the shrimp - so sweet and plump and juicy and cooked exactly the right amount of time. They had that perfect little POP of an expertly timed crustacean! Then it was on the the Godchaux salad a wonderful mix of iceberg lettuce, crab, boiled shrimp, egg, anchovies in a Creole mustard vinaigrette. Again - the crab and shrimp were just so fresh and sweet and perfectly cooked. I could eat this salad for lunch every day for the rest of my life. Our final plate was the Sautéed Poisson (drum) Meuniere Amandine with crabmeat. Beautifully prepared fish with more of that crab on top. The fish tasted so very clean and fresh that we knew it had to have been swimming mere hours before. We had no dessert since we were full and knew that 2nd lunch at Central Grocery awaited us. Our waiter was the venerable Mr. Dorris - a reserved, but friendly elderly gentleman who might have worked there forever. We marked that even the waiters called out to each other as “Mr.” in the style of the era that was. We ate a lot at Galatoire - but nothing was heavy or greasy or overly rich (besides the natural richness of the oysters and crabmeat), so we didn't feel ill or sleepy or dopey.
Posted by Kim S. at 2:33 PM