After the museum, we went to Coop's for lunch. It’s a little divey place just down from Jackson Square. Mr. Kim had his first Abita - Purple Haze and liked it just fine: The fried chicken description sounded spicy, so I opted for the 'Bayou Appetizer' - shrimp, crab claws, oysters and crawfish. Not very good. Everything was deep fried and over-battered and overcooked. The crab claws were hilarious - just the little wiggly part of the claw, pulled off, battered and deep fried. You couldn't even taste the miniscule dab of crabmeat. Mr. Kim got the fried chicken, which was NOT too spicy, after all and actually very good. It came with rabbit and sausage jambalaya and slaw. All pretty good. Unlike my husband who loves the challenge of inferno-hot peppers and sauces, I am what's called a super taster, which just means that I am EXTREMELY sensitive to spicy heat and sometimes bitterness. I wish I wasn't because it really gets in the way of my food enjoyment. But anything too spicy for me just ruins a meal. I feel real pain and then I can't taste anything after it calms down. So I was concerned about meals in NOLA. I was afraid that things would just be too spicy for me and that I would be this dork asking everyone, "Is it spicy?" ("Have you seen my stapler?") But I was pleasantly surprised. Most of the food we had was perfectly in my comfort zone. I had a bit of a problem with the shrimp and grits at Luke, but I still enjoyed it.

By then it was about time to go back to the hotel and pick up our luggage. One last time to sit in the quiet courtyard and listen to the fountain, take a few final pictures and say goodbye to New Orleans: 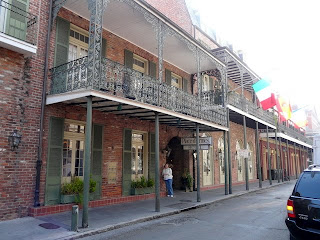 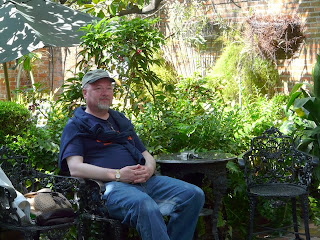 We had an amazing time and found yet another place to remember and love and come back to.

I am so glad that my Mr. Kim suggested this trip to celebrate our anniversary. It was exactly what an anniversary trip should be: romantic, with beautiful surroundings and lots of together time. I can't say enough that I have the best husband.

Mr. Kim: Had it not been for all of Kim’s inquiries and solo research, this trip would have been much less rich. Surely we would have missed most of the restaurants and would have complete missed City Park and Magazine Street, since the totality of my planning was get us there and remember to see the French Quarter. I am so glad to have an imaginative and fun-seeking wife. I can’t say enough how lucky I am to have married my best friend.

Kim, again: See what I mean about him? How in the world did I rate such a man? 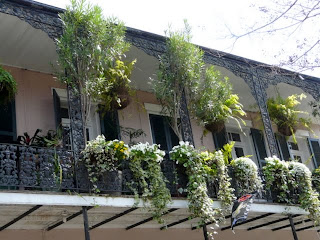