Tuesday, March 23 Last Day
Our flight was at 5:53 pm, so we had to be at the airport at 4pm. My lack of attention to details meant that I kind of messed things up today. It was supposed to be pastries from Croissant D'Or eaten on the levee beside the Mississippi. Then either the Presbytere (Mardi Gras museum) or the Ferry to Algiers Point and maybe Mardi Gras world, if there was time. Then a cab to Willie Mae's for chicken, back to the hotel to pick up our luggage and then another cab to the airport at 3:30. The other Willie Mae's option was to take all our luggage (one big bag and 3 smaller ones) into the restaurant and then we'd have to arrive at the airport way too early. It was just much too complicated and awkward for a plate of chicken - no matter how heavenly. We decided that we'd plan better next time and just do fried chicken at "Coop's", recommended by the fellow at the hotel.

So, this figured out, we showered, dressed, said goodbye to our room, checked our luggage with the front desk and set off. Croissant D'Or is closed on Tuesdays. Ok, how random is THAT? So is the Parkway. The Botanical Gardens are closed on Mondays. So is Elizabeth's - which IS open for breakfast today - at 11AM! Sheesh. So we wandered around a bit. And ended up back at Stanley for a good, but exceedingly long in coming, meal. Mr. Kim had a very good Rueben and onion rings (Any obviously diner food falls into the 'breakfast of champions' category) and I had the classic - scrambled eggs, whole wheat toast, bacon and potatoes.

Another example of my mismanagement was leaving until the last day the procurement of office treats, our souvenir (usually something that we can use as a Christmas ornament) and our candy and pralines. So we raced around getting those things (found a lovely glass fleur de lis for the tree) and took a chance and peeked into St. Louis Cathedral on Jackson Square to see if it would be open for a look-in: 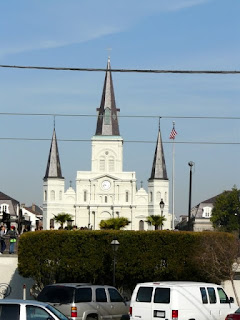 The Big Book very much pooh-poohs St. Louis - calls it "ugly" and "grim", in fact. But we thought it was lovely. A beautiful example of French architecture and the oldest continuously active cathedral in the US. The current building was dedicated in 1794 and became a minor basilica in 1964. The original building was destroyed by a hurricane in 1722. On Good Friday in 1788 a fire started in the French Quarter. Since it was Good Friday and a solemn holy day, the priest refused to ring the church bells to sound the alarm, as they usually did in case of fire. The fire went out of control and proceeded to burn down 850 buildings. Including the cathedral. OK, no smirking. The day before we took lots of pictures at St. Alphonsus and St. Mary's. They are being worked on and the priest said that we were welcome to take pictures. At St. Louis there were people worshipping (not a mass, just individuals in prayer), so we didn't take any pictures - though others did - flash, too! Unfortunately the gift shop doesn't stock any postcards, only a too-expensive book.

Just next door to the Cathedral is the Presbytere, a very official looking building that was built as housing for clergy, but never used for that. It's part of the Louisiana State Museum and houses the Mardi Gras museum: 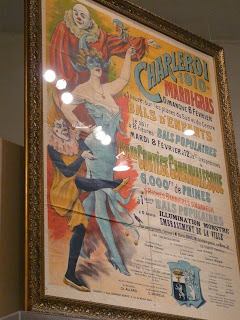 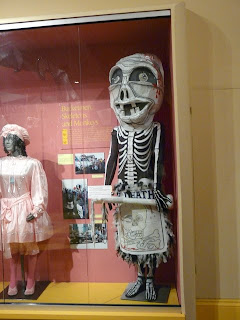 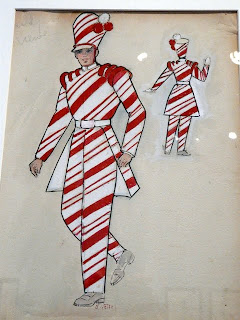 My favorite part was the display of ephemera - invitations, dance cards, menus, all very elaborate and beautifully decorated. I could have looked at them for hours.
Posted by Kim S. at 4:22 PM