We veered off at one point to see two churches that I'd read about in the Big Book (sounds so AA - which I imagine does as well in NOLA as GA does in Vegas - feast or famine, likely). The churches are St. Mary's Assumption and St. Alphonsus. They are Roman Catholic churches right across the street from each other. St. Alphonsus was built in 1855 and St. Mary's in 1860. St. A's congregation was Irish and St. M's German and they just didn't want to worship together, so they built two gorgeous churches. St. Alphonsus is just breathtakingly beautiful and in the midst of much needed restoration and repair - long term damage and mistakes (painting over the gold leaf on the huge, gorgeous columns, for example) plus Katrina. This church is full of light. It is really comparable to some of the churches in Europe that I've seen pictures of: 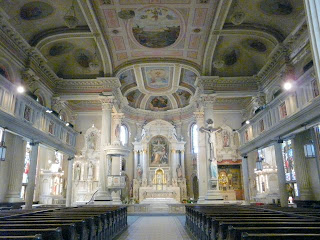 The entire ceiling is covered with lovely frescos. Lot's of gilding around and some of the special areas are surrounded by those lights that resemble dressing room mirror lights. That was a little odd. One of the frescos so lit was of Jesus, who I immediately dubbed "Jazz Hands Jesus": 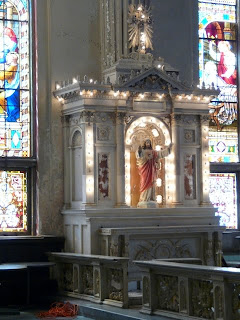 No, lightning didn't strike; why do you ask?

St. Mary's is only less beautiful by comparison with St. Alphonsus: 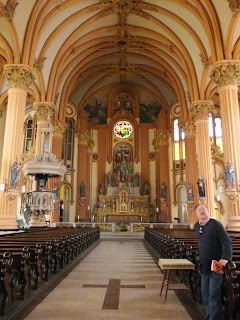 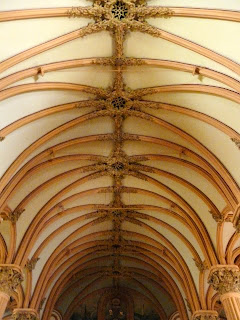 A lovely church with a bizarre little chapel full of reliquary objects and Father Francis Seelo's coffin. Fr. Seelo was the hero of the 1867 yellow fever epidemic and was beatified in 2000. St. M's is the national shrine for him.

From here we walked back up to Magazine Street - a shopping area that goes through the Garden District. We were tired and thirsty, so we stopped in at Juan's Flying Burrito for a drink. We decided we were a little nommy, so we ordered chips and (very good) house made salsa and a couple of beef tacos. We finished our Garden District walking tour including Archie Manning's house (we sent a picture to The Child, who loves Peyton even more than she loves John Besh), John Goodman's house, Commander's Palace and the Lafayette Cemetery. We looped back down to Magazine Street and wandered around some. We went to Sucre, an amazing candy/dessert/gelato shop. We got some lovely chocolates and macarons to take home (The Child is obsessed with macarons) and I tasted some fantastic gelato. We stopped in at La Davinia Gelateria for a cup of Thai gelato - lime, coconut and pandan leaf. It was good, but not as good as the one I'd tasted at Sucre.

I really planned this day badly. The place that I wanted to go for breakfast - Elizabeth's (famous for praline bacon) - doesn't open on Mondays. And we should have done Magazine Street early and then done the walking tour of the Garden District after lunch because so many of the places we would have liked to go into were closed or closing up. But it was fun to window shop. Walked back up to St. Charles and took the streetcar back to Canal and walked to the hotel. We had a little bit of a rest and then taxied to Cochon for dinner.

Let me start by saying that before even walking into the place it had a bit of a black mark against it. I had it as dinner for Monday night on our itinerary, but Mr. Kim thought that he might have made the reservation for Sunday. And he thought that it was for 8pm, but wasn't absolutely positive. So we called numerous times and got nothing but voicemail - we left two messages requesting a call back to confirm, but never got a call. They need to hire a couple of these unemployed folks at minimum wage and have them answer phones or at least return calls. So we were right on the edge of being pissed. Not to mention how the raves about this place at eGullet had set them up. They needed to wow us. Reader, they did. EVERY SINGLE THING was delicious. The servers were all young and friendly and seemingly really excited about what they were serving. We started with cocktails (our usual unsweet tea with extra lemon kinda fell by the wayside in NOLA). Mr. Kim had George T. Stagg bourbon and ginger and I had a Marchac Sunrise - Dos Lunas silver tequila, macerated strawberries and ginger beer - VERY refreshing.

Mr. Kim: I had never heard of most of the brands of bourbon before that were being offered, so I just picked a moderately priced one and ordered. Stagg is deep and oaky and smooth. The bartender walked up for a status check about 2 minutes after serving and as a parting statement said yes, he likes Stagg too, and that you’d never know it was 147 proof. Quick math, 73.5 % alcohol, two or three shots in the glass….. Three minutes later, I had to differ – I could definitely tell it was high test. My attitude was getting better by the second.

We started with fried rabbit livers w/ pepper jelly and toasts, deep fried boudin balls w/ whole grain mustard and pickled peppers, a Boucherie plate w/ assorted meats, pickles and pork rillette (must figure out how to make this stuff - between Mr. Kim's new smoking skills and eGullet and Cookskorner, I know I can do it). I was sad that they didn't have the fried pork ears on the menu anymore. What??? Seriously, I was! Everyone at eGullet made them sound so good. Oh, go on then, Mr. Kim looked at me the same way.

It was all just crazy crazy good. Mr. Kim liked the boudin balls best of all and I could have eaten those livers for hours. For his main course, Mr. Kim had the Louisiana Cochon w/ turnips, cabbage & cracklins. Basically a pork 'cake' (as in crab cake) of tender, smoky gorgeous pulled pork w/ tender cabbage, turnips and apple chunks and a curly pigtail of cracklins on top - heavenly good. I had the oyster BLT with the bacon being house made. Oh My Goodness. This was fantastic. I eschewed most of the (very good) bread so I could eat more oysters and bacon. Even the tomatoes were good. For dessert Mr. Kim settled for a good cup of coffee to fight food-induced sleep and I had the Ponchatoula strawberry shortcake (I just realized that I had a strawberry dessert at Luke, too - I must be ready for spring). The strawberries were fine - from Florida, I guess. But the shortcake was perfect. Exactly what shortcake biscuits should be. Tender, flaky and crispy edges. They had almost a glazed effect. I'd love to know how these were done. I said that Cochon needed to wow us. They certainly did - but not in any over-the-top, showy way. This food was miles better than any food we can get in Richmond - but it is completely approachable and comfortable. It's affordable, too. We ordered much more food than we would normally order in a restaurant at home, including 2 cocktails and dessert and the bill including a 20%+ tip was $145. If we had access to a place like Cochon all the time, I'd guess that a normal meal would be somewhere around $50 - easily within range of a weekly visit.
Posted by Kim S. at 4:09 PM